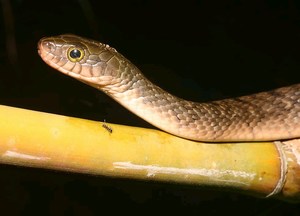 Mention the word ‘snake’, and generally 95% of people run for the hills!. This is probably the worst thing you could do as you will arouse the snake’s attention. As most bushwalkers will tell you, it’s better to stand still and let the reptile get on with his business and go past you. Of course there are those times when you unavoidably step on one and then shit hits the fan, so to speak. It happened to me in Australia one particular year, and although I was lucky not to be bitten, the partner of the snake underfoot was not impressed. The snake in mention was a King Brown, one of the deadliest snakes in the world, and promptly chased me down a dry gully. In Indonesia on my travels I have come across snakes numerous times and just applied common sense in our meetings. Chances are that you will never come across a snake unless you travel in the jungles or open grasslands. A majority of tourists will never see a snake as they never venture off the beaten track.

In Indonesia it is estimated there are around 460 snakes and of that total only six are considered to be toxically poisonous and cause you to fall off the perch and depart this world. Snakes are, without a doubt, one of nature’s most beautiful creations. And, as such, should always be treated with respect and not clobbered with the bough of a dead tree. Snakes will usually try to escape rather than attack you. So, it’s a matter of common sense if you go trekking in the jungle or other areas outside the norm for tourists. Always remember, snakes can be unpredictable and so it’s best to treat them with respect. I had a friend of mine in Central Java who was bitten by a small Python and although not a poisonous snake, he was left with a not-so-nice wound on his arm that lasted for a long time.

Here’s an interesting related article about a group of conservationists in Central Java who prefer to protect snakes. Good one fellas!: 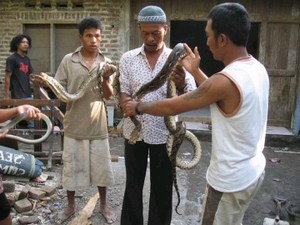 Several years ago, rats were a big problem for farmers in Caturharjo, Pandak, Bantul, as they often attacked ready-to-harvest rice plantations. These days, thanks to a local group’s snake conservation efforts, rats are no longer a problem. The idea to protect snakes, the predator of rats, according to villager Suprapro, 46, came after local residents learned an increase in the number of rats in the area was due to a decrease in the number of snakes. In 2000, local residents established a snake study group called Keompok Studi Satwa Ular (KSSU) and introduced an initiative to protect snakes — all types, including poisonous and non-poisonous ones — by prohibiting hunting of the reptiles in the region and keeping captured ones for breeding. Their efforts have paid off; in less than a year, the rat population in the region has sharply dropped and villagers’ crops are relatively free of rat attacks.

“Our objectives are to protect snakes and other reptiles here and the surroundings in a bid to improve our quality of life,” said villager Marsudi, 35, who is a graduate of Gadjah Mada University’s School of Philosophy according to Singgir Kartana.

However, he added, it was initially an uphill battle to persuade people to participate in the group’s activities, as most people saw the group’s effort as pointless.

KSSU currently has 17 active members who are residents of Pandak and surrounding areas.

The group’s main conservation activities, Marsudi said, have been focused on protecting rare species, breeding them and then releasing them back into their natural habitat.

“We routinely monitor the locations where we release the snakes to prevent them from being captured by illegal hunters,” said Marsudi, adding the same monitoring routine was also carried out in snake-breeding areas such as the northern part of Pandansimo Beach.

The group’s campaign for the protection of snakes is carried out through socialization activities at exhibitions, presentations, seminars and workshops. The target audience includes university students and members of nature lovers clubs, as well as students from kindergartens to senior high schools.

Marsudi said the basic concept of conservation that KSSU promoted was creating a balance in nature — in particular, a balanced, natural food chain.

KSSU has dozens of species of snake that it protects and breeds at its headquarters, including endangered species like the sawa kembang, the green sanca and rainbow snakes. The snakes are kept in glass boxes and a conservation pool.

“We incorporate the snakes in our campaigning activities,” said Marsudi, adding the group also had a number of campaigning materials such as CDs and books on snakes.

To make its programs more effective, Marsudi said KSSU cooperated with other concerned parties, including government and non-government institutions and organizations.

In 2004, the Bantul regency environment body selected the group to represent Bantul in the Kalpataru environment awards.

In terms of financial support, Marsudi said KSSU depends very much on its own sources. The group currently runs three fund-raising activities — a band equipment hire, a welding service and a silk-screening venture.

“Our main concern is that we still find illegal snake hunters around here,” Marsudi said.

KSSU plans to make these hunters partners to make its activities more effective and improve its conservation efforts in the future.