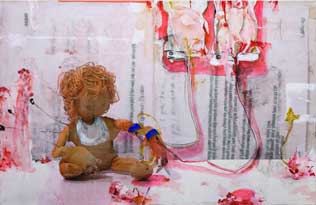 “It was the paradox between the loudness of the compositions and the stillness of the content,” says Jim Supangkat, asked what struck him when encountering Ay Tjoer Christine’s artwork. He is the curator of Ay’s exhibition Silent Supper, currently on show at the Ark Galerie, South Jakarta.

The violence in her works is unmistakable. Using digital print on canvas painted over with a reddish tinge, she seems to “deconstruct the readability of her work,” says Jim.
To understand her oeuvre, one has to look deep into the warren of her past development.

Born in Bandung in 1973, she studied graphic art at the Fine Arts Department of Bandung Institute of Technology. During her daily work as an artist, Ay felt the breaks she had to take while eating interfered with the creative drive she needed to produce her art.

As a result, she stopped eating at regular intervals, which boosted her productivity but ultimately made her sick.

She discovered there are two different energies in her body; one depends on food and keeps the body alive, the other works the creative sources. Both need silence to keep focused.

These considerations reflect in her works currently on exhibition at Ark Galerie. Experimenting with digital prints of small cloth puppets that eat in a state of silence is one of Ay’s major topics.

“Her puppet installations are like little theaters,” says Jim.

In her Silent Supper series, she depicts the epitome of silent eating. The faceless puppet-like dolls portrayed in her photo prints are connected to intravenous tubes that feed solid food, like chicken legs stored in plastic pouches, directly into the bloodstream.

The image, which deprives the act of eating of all its sensual connotations, was derived from Ay’s ruminations on the ideal form of eating.

“Trees,” she says, “have a very different lifestyle from all other living beings. The smooth actions and sophisticated structures of a tree are holy to me.”

The way a tree nourishes itself — the slow, continuous and silent movements — “are a concept of living that people can adopt”, she explains.

The idea of religion and its impact on human life are a recurrent theme in Ay’s works, too.

Born a Christian, she says of herself that she is not a very religious person, but she unmistakably understood that for other people, religion is far more than just a part of life.

In her series Liquid Talk with Me Again she shows one of her small puppets undergoing a violent encounter, with red liquid and solid food as its object of desire.

In a sequence of nine depictions, the puppet slowly approaches, intravenously connects and climactically unifies with the food. In an anticlimax after the puppet’s desires have been satisfied, it starts to pray and finally falls asleep.

“The red liquid is not blood, it is like holy water or the essence of life,” Ay says. “Everybody wants to approach it, it triggers a state of ecstasy, and it is present in everyone of us,” she adds.

The importance of the holy liquid is portrayed in her installation The Three Actors and the Blood. Three abstract, life-size, clothed figures made of metal wire are interconnected by medical tubes attached to small red pillows within the figures, representing their hearts.

“It is important to feel the liquid within you and other people and the world around you,” said Ay. By being connected via feeling the liquid, any vocalized communication is made obsolete.

“I ‘found’ her in a collective exhibition,” says Jim adding that nobody else was interested at that time in the now famous and awarded professional artist.

“Her use of different media and the puppets is unique, I have never seen anything quite like it,” he said.

“At the end of the day, you find out that she is obsessed with silence. She hates verbal and facial expressions.”

As Ay depicts the silent world in all its noisy forms, a contrast develops that leaves the observer feeling alone with their interpretations.

Giving in to the sound of her silence, one is taken aback by the immense cacophony of the world in which we live.