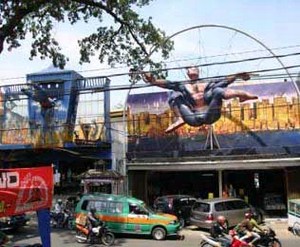 The epithets given to the West Java city of Bandung can be numerous and varied: such as, for its art deco buildings, it is called “the Paris of the East“; for its floral surroundings, “the Flower City“, and for its parks and gardens “the Garden City“. But it might also be awarded the title of “the Shoppers’ City“. With its numerous factory outlets, which now seem to be in practically every corner of the city, its famous — if not infamous — Jl. Cihampelas, the “shoe street” of Jl. Cibaduyut and the arrival of bigger and better malls, Bandung is maintaining its position as something of a shopper’s paradise.

Factory outlets have become such a popular place or concept for shopping that they have begun to appear in Jakarta and Bogor but Bandung seems to be maintaining its position as the real home of factory outlets.

Take a drive up Jl. Dago and you may be left in a state of confusion as to which factory outlet to stop at. They line this street and seem to compete with each other for the largest signage and trendiest frontage. Various designs are displayed to attract the eye but the shopping experience that waits within each of these retail outlets is similar.

These factory outlets offer an extensive range of clothing and accessories and many of the items are graced with designer labels.

At times this range can be nothing short of mystifying. For example, quite thick and heavy winter coats seem a little out of place in the hot climate of Indonesia but, then again, for those planning trips to colder countries such items might be ideal.

The range of items for sale may be varied but the price tags are consistently low. Although the name “factory outlet” tends to conjure up images of shelves stacked high and little or no presentation and/or comfort for shoppers this is, in fact, not at all the case.

Certainly the amount of stock that is on display can be somewhat mesmerizing but the presentation of the shops is often attractive and the design and general layout of these factory outlets can be such that shoppers may spend quite a good part of the day within just one of them.

There are factory outlets in the rather up-market Setiabudi district of the city and on Jl. Riau, not far from Bandung Indah Plaza, which are really much more than just factory outlets. They have restaurants and cafes within them and even play areas for children that clearly highlight that the owners are willing and able to cater to family visitors and buyers.

Factory outlets are, then, in abundance all around Bandung but they have also diversified a little to become boutique-type outlets.

Again, in the Jl. Riau area, there are now factory outlets that are comprised of smaller boutique-type shops all housed within a single factory outlet.

Jl. Cibaduyut is a quite long and winding road with a busy flow of traffic coming into Bandung and heading out toward the hill town of Ciwidey.

As a consequence of the flow of traffic, the road is rather noisy and dusty and thus not a particularly attractive proposition for the pedestrian shopper.

However, the determined shopper may be rewarded for perseverance as along much of this roadway are huddled as many as 100 shoe sellers and makers.

This means that the shoe shopper may either buy directly or place an order for a specific design or type of shoe. A similarly busy and rather frantic street is Jl. Cihampelas.

This street has been known as the “jeans street” in recognition of the vast numbers of jeans that are for sale there but it is not only jeans that can be purchased along this colorful street.

With the frankly weird and wonderful array of giant figures that adorn many of the shop fronts, Jl. Cihampelas is a sight to be seen — if not a rather tacky and over-the-top sight. Jeans are for sale in abundance as are T-shirts that are typically humorous in nature.

In addition, reflecting the huge figures that clamber over or fly out of the shop fronts, many of the shops here feature clothing with images or logos of superheroes. All of this makes for a colorful scene but the shopping experience is rather more “cheap and cheerful” than high-class. The Jl. Cihampelas area has, though, been improved by the development of Cihampelas Walk (or Ciwalk, as it is more typically referred to). Here there is a department store, cinema, an open-air walkway that features a good range of restaurants and various other boutique-type shops.

Although much of the decor of Ciwalk is bright and colorful, reflecting its near neighbors on Jl. Cihampelas, the general atmosphere here is much more of a pleasing one for the shopper.

This is not least because cars are parked and shoppers can roam freely away from the bustle and dust of a street like Jl. Cihampelas.

Shopping malls too, then, are part of the shopping scene in Bandung with relatively new and major developments like Bandung Super Mall (BSM) featuring prominently and the central Bandung Indah Plaza (BIP) going through recent renovations to improve it.

Bandung does then have a diverse, even rather mixed bag, of shopping experiences but the majority of shoppers is likely to find something to their liking. Bargains are there to be found and the bargain hunting in Bandung can be a pleasurable and even fun experience.