The water of young coconuts, which has a delicate nutty flavor, is one of the most popular natural thirst quenchers in the tropics.
Not only along the coastlines, but also on the sidewalks of the city, heaps of greenish young coconuts tempt thirsty passers-by.

Some vendors leave the nuts as they are, while some sell immature coconut water ready-to-drink by making small holes in the tender ‘eyes’ or soft spots on the shell and inserting straws. When the buyer takes the time to sit down on a nearby bench, the vendor empties the coconut into a glass in one swift motion. Not one drop will be spilled.

Whereas in former times the water, and its by-product called nata de coco (cream of coconut), were only available in tropical countries, now they can be bought in cans all over the world.

In eateries and restaurants, coconut water is often given specific flavor enhancers like granulated sugar, rock sugar, a pouring of coco syrup, blanched screw pine leaves or a pinch of salt. In the eastern islands coconut water is served with an addition of brown sugar and salt.

For those not yet accustomed to drinking natural tropical beverages, please first drink a small quantity out of the nut with a straw because a large quantity of coconut water, especially from the yellow variety, tends to lower some people’s blood pressure and can make you feel weak. Nature has put the right quantity of water in coconuts. One normal nut contains about 200 ml of water, which is considered enough to lessen one’s thirst. In some remote regions, though, people tend to plant green-skinned coconut for its medicinal properties, considering water directly obtained from the green coconuts to be sterile. 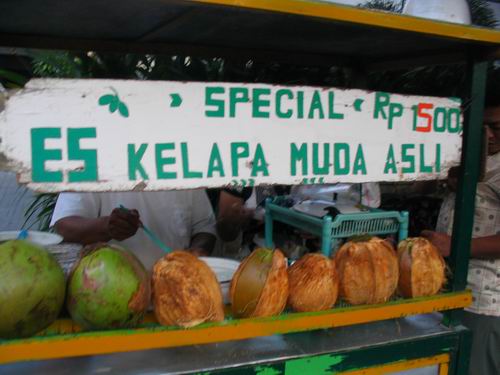 Coconut water is also found in regional dishes. In Jakarta and Yogyakarta, coconut water is frequently added to create a special dish when cooking soybean dishes or even when boiling or braising chicken. Scraped immature coconut meat is a symbol of tender love in Jakarta’s outskirts, and is used in sayur bebanci, a dish served when future in-laws are invited for the first time.

Well, how does one know whether the nut has the correct tenderness of an immature coconut?

There are “normal” coconuts and there are kopyor coconuts, whose meat is not smooth and white, but a bit crumbly and coarse.

How does a normal coconut become a kopyor, or how do you know that a particular nut is kopyor? In Indonesia, there are about one hundred species of coconut, but it is not yet precisely known which variety will produce specifically kelapa kopyor nuts. A coconut palm tree with kelapa kopyor nuts will mostly continue into a kelapa kopyor-producing palm tree. But in some cases there are palm trees that produce both kelapa kopyor and normal nuts. According to coconut specialists, a nut will become a kelapa kopyor if it has abnormal growth during the fruiting process. The growth is caused by a physiological change which causes genetic mutation at about six to seven months after flowering.

The villagers of Central Java have another explanation, though. They say it is caused by the moon. Formerly, before the kelapa kopyor gained popularity as a delicious ingredient in drinks and sweets, people considered a coconut palm tree with kelapa kopyor nuts to be a disaster. Consuming the nut was taboo. The poor nut with abnormal growth and crumbled nut meat had been devoured by the moon. Therefore many areas in Central Java called them not kelapa kopyor, but kelapa puan, meaning that the moon ate the nut meat during a lunar eclipse. To prevent that, all the plants are beaten with a broom and the domestic animals are awakened so that the moon will be frightened. When eating kelapa kopyor do it on the full moon and enjoy its nutty satisfying flavor!

How to know that you have bought a kelapa kopyor? Do not shake the nut but move it from left to right. If it is heavy and feels like there are dry contents inside, it should be kelapa kopyor.