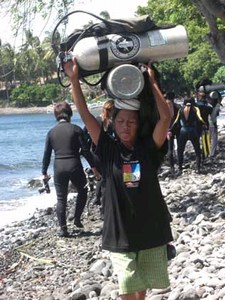 Before Ni Nengah Dempi joined the Sekar Baruna women’s cooperative in Tulamben, Karang Asem, it was a daily struggle to feed her five children. The cooperative is located near a number of popular diving destinations some 90 kilometers east of the provincial capital of Denpasar. Dempi and some 28 other women and girls from Tulamben now work carrying diving equipment the 500 meters from hotels to scuba spots. They are paid Rp 8,000 per diving session. “Most Balinese women are willing to work hard. This is hard work in physical terms, but it is alright for us as long as we can feed, clothe and educate our children,” Dempi said.

Tulamben has been transformed from a dry, unattractive and arid village into a diving paradise. Its remarkable underwater life has attracted thousands of divers across the world to this once sleepy fishing village. The village has been dubbed one of the best diving destinations in Indonesia and even in Southeast Asian countries.

One of the attractions is the Liberty shipwreck. The Liberty worked as a cargo ship during World War II.

There are around 1,204 families in Tulamben, which 20 years ago was one of Bali’s poorest villages.

But now, there are various accommodation options for domestic and overseas visitors from luxury villas owned by large-scale operators and rich investors to modest guesthouses belonging to local people. Most of the facilities are located nearby the beautiful Tulamben beach.

“Peak season in Tulamben is usually from July to the end of the year-end holidays,” Dempi said.

I Nyoman Karyasa, the head of Tulamben, said the growth of the tourism industry would be of particular benefit to fishermen who had no fixed income. “One day, they net a lot of fish, the next day they come home empty-handed,” Karyasa said.

The development of tourist-related facilities has brought new hope for the community’s poorest families.

In l990, the village head set up a small cooperative called Sekar Baruna. “The cooperative was set up for the benefit of uneducated and poor women,” Karyasa said.

One function of the cooperative is to arrange work for the women as porters. They generally work from 8 a.m-5 p.m.

At the end of the day, a cooperative official collects all the money together, setting aside 20 percent of it as savings and 5 percent for the village association. The rest is divided evenly among the cooperative’s 29 members.

“We can borrow money from the cooperative with a very low interest rate because we are members. In the past, we had to borrow money from cold-blooded people who demanded we pay almost 100 percent interest,” she said.

Karyasa said villagers could borrow money to start up a small-scale business, such as a home-based laundry or shop.

He said Tulamben must be preserved as a diving and tourist destination by keeping its environment healthy. “We have established rules to prevent locals and visitors from harming underwater and coastal areas,” he said.

Fishermen are not allowed to use poisonous or harmful fishing devices when working off the Tulamben coast.

Every hotel, restaurant and villa is required to pay a certain amount of money every month to support village improvement programs such as cleanup days.

The establishment of Sekar Baruna cooperative is really a clever way of helping the poor help themselves.