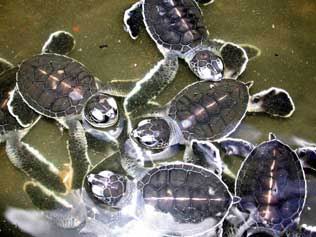 A heavy cloud darkened Sukamade Turtle Beach one evening in Banyuwangi, East Java, in early June. Stars could be glimpsed occasionally, but they soon disappeared as the clouds rolled across the sky and the beach turned black.

In the darkness, two rangers from the Sukamade Forest Reserve were on duty. They watched over the beach continually, because this is where the endangered and protected marine turtles come to lay their eggs.

The beach is the turtles’ maternity ward.

Sukamade Turtle Beach in Banyuwangi and Puger Beach in Jember used to be the two main locations in East Java favored by sea turtles for laying their eggs.

For some years now, however, the turtles have visited only the Sukamade beach, located 239 kilometers from the East Java capital of Surabaya. Almost every night, a turtle lands on the beach to rest or to lay eggs.

Investigations carried out by Indonesian ProFauna also show that the illicit trade covers several different “commodities” made from sea turtles, including their meat, eggs, shells and souvenirs created from their body and carapace.

Puger Beach, along with the Sukamade beach, has been identified as one of the centers of the illegal turtle trade. Others include the Turtle Bay Beach in Cilacap, Central Java; Pangandaran and Pelabuhan Ratu in West Java; Pangumbahan Sukabumi and Samas Beach in Yogyakarta.

Turtle eggs are the most popular commodities traded in this illegal business. Others are turtle oil, turtle shell souvenirs and turtle meat.

It is estimated 1,000 to 2,000 turtles are killed every year, their body parts processed and sold.

The Hawksbill Turtle (Eretmochelys imbricata), the Green Turtle (Chelonia mydas) and the Olive Ridley Turtle (Lepidochelys olivacea) are the varieties most commonly poached.

Turtles are also accidentally caught by fisherman and later killed — a direct violation of Law No. 5/1990.

This legislation is designed to conserve wildlife, natural resources and the ecosystem, and clearly prohibits trade in wild creatures.
The penalty for violating this law is five years in prison and a fine of Rp 100 million (US$11,000).

In Banyuwangi, turtle eggs can be seen for sale at the town market and at the central market of Jajag subdistrict. Traders usually offer eggs for sale early in the morning — and undercover.

This year, the number of turtle eggs on offer has been much reduced.

“It’s already become difficult to get turtle eggs,” said local resident Bambang. “When the eggs are on sale, they are few and very expensive, fetching up to Rp 2,000 (US 20 cents) each.”

To ensure that turtles and their eggs are protected from thieves, forest rangers are continually on watch. Included on their beat is Sukamade Turtle Beach, which is patrolled at night when the turtles land and begin laying.

Patrols usually start around 7 o’clock in the evening and last until dawn.

On June 8, I accompanied two Sukamade Forest Reserve rangers, Slamet and Jumadi, as they carried out their duties.

In pitch darkness, the two rangers began their shift by negotiating their way through a thick mangrove forest, the only way to reach the turtle beach by land. They then poled across a 20-meter river in a small bamboo skiff.

When they arrived at the edge of the beach, the men divided their duties: one traveled east and the other west for a distance of 3.5 km, their journey illuminated only by moonlight.

One of the standard operation procedures for turtle patrols forbids the use of lights, such as flashlights and matches, because the turtles are sensitive to light.

Turtles approaching a beach will turn back to sea if they spot a light, a sure indicator that a predator is waiting for them — that is, humans. Flashlights are permitted for use only when the turtles have already laid their eggs.

“Turtle egg poaching is usually done on a night like this,” said Jumadi. He was right.

Around 3 a.m., the rangers surprised some suspected turtle egg thieves pretending to be fishermen. Eventually, the men had to be released for want of concrete evidence that they had stolen turtle eggs.

“They said they were only planning to fish,” said Slamet.

However, this group seen were carrying a sack and shovel along with their fishing gear.

Although unarmed, the rangers showed no lack of courage. But they admitted they could face difficulties if they were attacked by a poacher carrying a sharp knife or homemade gun.

“You can see for yourself how difficult it is for us in these conditions and darkness,” said Slamet. “If someone starts shooting, how can we shoot back?”

Apart from the difficult field conditions, the rangers are also handicapped by a lack of appropriate equipment. They don’t carry walkie-talkies or other communication gear, so must rely solely on flashlight signals, using a system similar to Morse code.

When a turtle lands on the beach, the officers signal to each other: “Three flashes means a turtle has landed and laid eggs,” said Slamet.

ProFauna chairman Asep R. Purnama said the patrols were not effective. They did not have proper equipment and were not provided with a boat, which meant they could not catch poachers at sea.

“If turtles are stolen at sea, what are the rangers in Sukamade supposed to do? Swim?” asked Asep.

The other problem is that Sukamade beach is accessible by both land, traveling along the shore, and sea, using a boat. Multiple access points thus make it easy for thieves and difficult for guards.

There are also too few rangers to provide adequate protection. Sukamade Beach Reserve covers more than 10 hectares, yet it is policed by only seven people. Five are forest rangers, and two are members of the Forest Ecosystem Protection unit.

“It’s absolutely essential that we have more officials to guard the turtles,” said Asep.