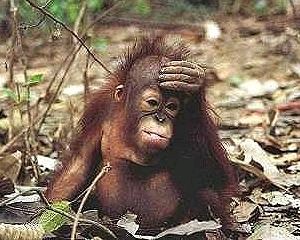 It is a well-known fact that orangutans are one of the planet’s most endangered species. According to statistics, Orangutans about 90 percent of those left are living in Sumatra and Kalimantan, with the remainder in Sabah and Sarawak in Malaysia. Many have been abducted and sold in the black market. Illegal logging negatively impacts on ecological systems and so does the world demand for palm oil. This has increased by 32% over the last five years with the advent of the rapidly expanding food and industrial manufacturing industries. The aim of the former Suharto government was to create a total of 13.5 million acres of palm oil plantations by 2000 – by 1999 the figure had reached 7.4 million, which is nearly five times the size of Bali. The sudden increase in palm oil use has led to the clearing of Indonesia’s tropical forests to create monoculture palm oil plantations according to the Orangutan Foundation International organisation. 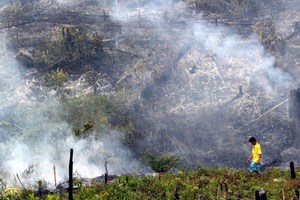 Studies in Malaysia and Indonesia have shown that between 80 and 100% of the species of fauna inhabiting tropical rainforests cannot survive in oil palm monocultures (Wakker 2000). In 1999, nearly 800,000 acres of forest were converted for palm oil. Global demand is expected to increase by 50% in the next five years, primarily because palm oil profits are assured by cheap labor, low-priced land, a lack of effective environmental controls, easy availability of finance and support, and a short growth cycle. Then there is the ‘slash and burn’ by farmers encroaching into National Parks. This is another cause for concern and especially in Sumatra. Various conservation groups have helped keep the primates alive. If you can assist in any way, then please check out the sites below, or just learn more about this planet’s most beautiful and endangered species: