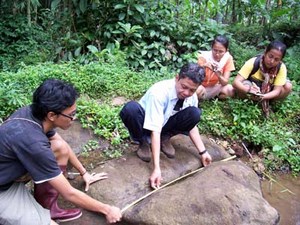 Archaeologists are worried a plan to construct new housing in Pasir Eurih village in the Tamansari district of Bogor will destroy 70 historical sites from an ancient, mysterious Sudanese kingdom. According to research conducted by students of Pakuan University in Bogor and the University of Indonesia in Depok, 33 of the sites are worship pillars or buildings. The relics are scattered over 500 hectares of land in the village. Archeologist Agus Arismunandar of the University of Indonesia said his team had strong evidence the historical finds dated back to the ancient Sudanese Padjajaran kingdom that ruled over the area during the megalithic period. There is writing on one of the sites that is similar to those at the ruins of the Pakuan Padjajaran kingdom in Batu Tulis, Bogor.

Agus, who started his research in 2006, said the sites in Pasir Eurih were the missing link in Sundanese history for the region according to Theresia Sufa.

“It is interesting how archeologists, including the Dutch, missed this site. Without it, Sundanese history in the area has remained a mystery,” he said.

Agus said the most important relics in the area were Batu Tapak, Batu Dakon and Batu Vulfa, all located near Ciangsana waterfall— believed to have been an ancient bathing place.

“They signify the existence of a powerful figure who once ruled over the area, but we are yet to find out who this figure was. We are still discussing it,” Agus said.

Recognised as a fertility symbol, Batu Vulfa is 143 centimeters long and 120 centimeters wide, with a 10-centimeter tunnel attached to it. Near Ciangsana waterfall’s ancient bathing place is the worship place called Raja Resi, which is predicted to be used as a retreat for hermits at the ancient time. But archeologists have warned building houses on the sites would bury the mysteries of the relics forever. University of Indonesia philologist Titi Pudjiastuti said the plan should be delayed because of the large amount of archaelogical sites in the area.

“They are a part of Sundanese history. If the sites are gone, it is going to be harder to reconstruct the history of this area,” she said.

Head of Sindangbarang cultural kampung, Mikami Sumawijaya, said it would be difficult to protect the sites as the land they were found on belonged to residents.

“I can’t do anything about it as land brokers have persuaded citizens to sell their lands to housing developers,” he said.

There is speculation housing developments will be constructed in two villages, the Pasir Eurih and Sukaresmi. Batu Karut and Cikolawung waterfall would be removed under such a plan.

“So far we don’t know which developer wants to build the housing, and as for the residents, we can’t do anything if they sell their lands to make some money for themselves,” Mikami said.

He said he hoped the regency administration would do something to stop the housing project.

“We can’t afford to lose these sites. We’ve already lost the Badigul Rancamaya site, where religious ceremonies took place during the Padjajaran kingdom era,” he said.

Mikami said most of the Pasir Eurih residents, who are farmers, sold their land to brokers for Rp 15,000 per square meter.

One resident sold 8,000 square meters of his land for Rp 120 million, he said. The sales are thought to have taken place at the land notary office as there are no records of land transactions at the Tamansari district office.

Mikami called on notary offices in Bogor to refuse to validate land transactions in the area.

He said Sundanese cultural leaders had also sent letters to the Bogor regent and West Java governor, calling on them to stop the sites being removed.

Head of the culture division at the Bogor Tourism Agency, Boy Gia Warman, said the administration was aware of reports of land transactions in the area, but was yet to do anything in response.

“I personally have visited the site. Of course, we don’t want to lose these sites, but the regent is yet to make a decision about this problem,” he said.

Pasir Eurih resident Aki Husen, 76, said he did not know anything about the housing plan in his village.

“I don’t own any land and I don’t know what the writing and pictures on the stones mean,” he said.

Husen said he only knew standard Sundanese history like the great Suryakencana, and could recall his now-deceased relatives warning him as a child that Ciangsana waterfall was not a good place for naughty boys.

“My grandparents told me naughty boys would find themselves in trouble if they stayed near the waterfall long enough,” he said.