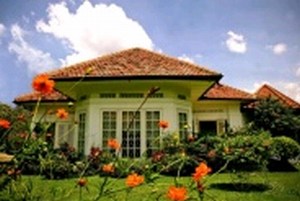 People call the house at the corner of Jl. Cik Ditiro ‘rumah cantik‘ (pretty house) or ‘dream house’. The Dutch colonial style building is a pretty sight for many motorists caught in traffic, with its white walls and classic French windows. The house’s charming garden is of no particular style, and yet is lovely–it has colorful flowers growing naturally. Beholders may notice the owner of the house has particular taste–not necessarily expensive, but refined. Since August last year, the pretty house has been on the market. One of the owner’s daughters, Diyah Sri Pradjwalita, 40, is in charge of dealing with potential buyers.

“I have received thousands of phone calls and text messages. Many of them say ‘I’m not a buyer. I just want to know why you are selling it. Will the new owner change the look of the house?’,” Diyah said.

Diyah said people send messages to her cell phone saying ‘Please, don’t let anyone change the design of your house. The traffic lights opposite your house are my favorites. Sometimes, I wish they’d stay red longer so I can keep looking at your house’ according to Evi Mariani.

The house, which has received several awards from the city administration, is protected under a 1993 gubernatorial decree on heritage buildings. The owner can add new buildings but cannot change much of the original structure, which is thought to have been built in 1932.

Indeed, many houses in Menteng have been changed considerably from their original architecture, despite the decree. That’s why, Diyah said, her mother and the whole family wanted a ‘soul mate’ for the house. They aren’t just looking for an amount of money.

“We’re offering this for sale with our heart and soul (with the house).”

The owner, Sari Shudiono, 74, declined to disclose how much she was asking for the house. The house’s property tax document says its tax-based value is Rp 9 billion (US$947,000). Recently, a house near Sari’s was sold for Rp 15 billion, Diyah said.

“Many looked at and appreciated our house’s original design, but didn’t have enough money for it,” Diyah said.

“There was one who had enough money, but they wanted to turn the house into a minimalist design.”

“Look at the tiles. They’re original. We don’t want someone to replace them with keramik (ceramics),” Sari said, adding that they were “Cheap looking”.

“All parts of the house are original; its roof tiles, doors and window frames.”

She tends to the garden herself with help from a gardener.
“This one has worked for me for eight years. The old one died,” Sari said.

“My first plant was the white frangipani there. It’s 42 years old–older than Diyah,” she said.

Sari doesn’t consult any references for her garden. She fashions it with her own style and taste.

“The plants here are not expensive plants,” Sari said.

“You should see the bougainvillea there in July. The flowers will blossom in full, various colors. The green color of the leaves will be covered with the flowers,” Sari said, pointing at a bunch of bougainvillea arranged in a white flower cart.

Sari has been living at the house for 50 years. Her husband, Hari Shudiono, had lived there before the couple got married in 1958. Shudiono died in 1973, survived by Sari and their five children.
Sari’s late husband was an entrepreneur, not an employee with a pension. Therefore, after he left, she had to fend for herself and five children in tow.

“I ran businesses, like antique repairs. I also let people rent my house to shoot movies, sinetron (soap opera) or advertisements,” she said.

The first feature-length movie shot at Sari’s house was ‘The Big Village,’ in 1974. Afterwards, many movies, ads and TV series have used the ‘classic home’ location. The house, a 350-square-meter building on an 863-square-meter block is also open for pre-wedding photo sessions.

“The property tax for this house is quite high, Rp 15 million (US$1,570) a year, but earnings from the shootings are enough to cover the tax,” Sari said.

The high tax is one of the reasons behind Sari’s decision to move, but the main reason is because she wants to be closer to her children who live in Bintaro, South Jakarta.

“I have been eyeing one house there. It’s half-finished and has been left empty for years; people call it a ghost house,” Sari said.

“I might want to change the design of the building there.”
“What mom has built here, would also be built there,” Diyah said.