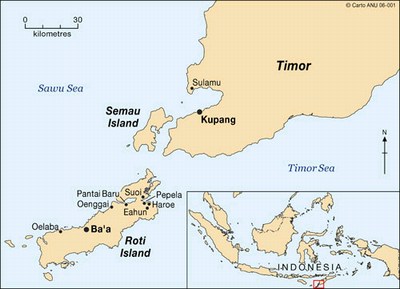 Located in East Nusa Tenggara, Roti Island lies between the Indian Ocean on the west and the Timor Sea on the east. It is 80 km long from southwest-northeast and about 23 km wide and has an area of 467 1,210 square km. Roti island is part of Kupang Regency but has its own regency. Along with some other nearby small islands, such as Ndao, it formed the kabupaten (regency) of Roti Ndao. The capital of Roti is Ba’a, which is located on the western side of the island. The village of Pepela is located on the north-eastern end of Roti and on the southern side of a large sheltered bay. Here you will sandy beaches and mangroves, while coral reefs are located in its centre. The uninhabited Dana Island (also called Ndana) just south of Rote is the southernmost island of Indonesia.

Roti island is beautiful with hills, valleys and escarpments but it is underwater where the beauty lies. Here the diving is good with spectacular walls and caverns, and a huge variety of marine life. Agriculture is the main form of employment. Fishing is also important, especially in the eastern village of Papela. In the village of Pepela, the sandy beach drops away steeply providing a deep-water anchorage close inshore. The bay is attractive and provides year round shelter from the strong easterly and westerly monsoonal winds. 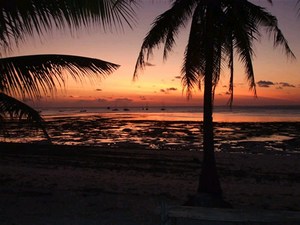 There is excellent surfing in the south around the village of Nembralla. It has a beautiful beach that offers a natural panorama and fascinating sunsets. Nembralla Beach is one of the very few beaches ideal for surfing. June to October are the best months for surfing and don’t be surprised to be sharing the waves with surfers from around the world.

The architecture of Roti Island is unique and so is their exquisite Ikat weaving. Roti has many historical attractions including fine antique Chinese porcelains, as well as ancient arts and traditions. The popular traditional music instrument Sasando comes from Roti Island.

A passenger ferry operates daily between Kupang and Pantai Baru, a small mangrove fringed bay on the north-western side of Roti. A motor boat also travels twice a week between Pepela and the village of Namosain in Kupang. The trip takes around four hours depending on the weather conditions.