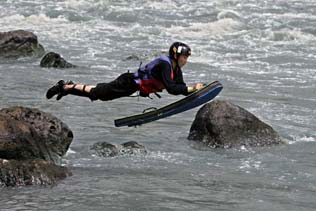 Robert Carlson, a Californian surfer, once said, “Anyone who jumps into the water and grabs a log is riverboarding. It harks back to Paleolithic times.”

Carlson introduced riverboarding to Americans in the 1970s. In the same decade, people in France and New Zealand also practiced the same sport.

In Indonesia, riverboarding was made popular in May this year by Rahim A.B.S., the owner of an outdoor equipment shop in Cigadung, Bandung, West Java.

With the support of his colleagues, he made 10 boards and used them on the Citarum and Palayangan rivers, both known in Bandung for their powerful currents.

Today, people are increasingly showing up to enjoy the “new sport” every Sunday. Lifeguards are on hand to help anyone who gets into difficulties.

Before jumping into the river, people have to wear a safety helmet, life vest and fins.

People seem to have taken to it like ducks to water.