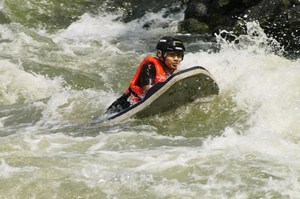 It was cloudy in Bantar Caringin village, Saguling, Rajamandala, West Bandung regency, last Sunday and Citarum River was flowing with greater force due to an early morning downpour. A group of people gathered on the bank of the tributary — which is regularly used for rafting practice — where they discussed the best spot from which to take off. This time, however, they were not going to practice rafting; they would be using boards instead of rubber boats, in a sport known as riverboarding.

Some participants looked anxious at the thought of crossing the powerful Citarum, armed only with boards. Ajo, 27, for instance, said he was not prepared to face the river that day. He was still traumatized from being flung from his board a few weeks earlier during a tryout session in a smaller stream, Palayangan River, in Pangalengan, Bandung regency according to Z. Yamani.

Ferry, 28, on the other hand, was all set to go riverboarding and was already wearing his life vest and helmet. After some balancing practice with his board on the riverside, he proceeded to a likely starting point.

Each carrying a vest and board weighing 5 kilograms, the participants walked a distance of 700 meters along the river bank before finding an ideal spot to start the activity; one with few rocks and a fairly mild current, allowing enough time to practice boarding skills before facing the roaring rapids downstream.

Although the river surface appeared calm, the current beneath was quite strong — one has to be confident of continuing with this adventure before setting off.

No doubt many newcomers to the sport begin their first ride with some trepidation. Minutes after taking off, the rumbling sound of rapids can be heard ahead and the river current grows wilder.
As riders enter the bigger rapids, the boards become harder to control and may even overturn. But panic lasts for just a moment, as once participants reach for their boards and have hold of them, its full steam ahead to the next rocky torrent.

After the initial feeling of panic subsides, riders can enjoy a refreshingly different water adventure — following the river currents for hundreds of meters downstream — and take pride in having traversed the hostile rapids on plain boards.

Extreme sports like riverboarding are for hobbyists who crave excitement. Mamay, head of the natural rock division of the Indonesian Rock Climbing Federation, said he had become considerably engrossed in this new activity.

“I’ve tried rock climbing and rafting with rubber boats, but riverboarding is truly personal. At first I was scared of facing the strong current laying down (on a board),” Mamay said.

The boards used by riverboarders in Bandung are produced by a workshop belonging to Rahim A.B.S. As well as being a reliable riverboard maker, Rahim is also a highly skilled riverboarder.

“When I went down the river (on a board) for the first time, I was afraid. But my conviction that proper equipment would ensure safety made me bold enough,” he said.

Rahim, who has a souvenir long scar on his shin from his first riverboarding experience on the Citarum, said good preparation for engaging in this extreme sport could reduce accidents.

He said life vests and helmets were sufficient safety equipment for streams or rivers graded one or lower. He also suggested fins be used so that less power is exerted.

Riverboarding has been popular for quite some time in Europe, the U.S., Australia and New Zealand. In Indonesia, where many rivers have fast-flowing rapids, it has been trialled for less than a year.
Although still considered a “new” sport, riverboarding is an alternative water activity for those who are fond of adrenalin-pumping, thrill-seeking adventures.

Meanwhile, surfing enthusiasts can make riverboarding their substitute when circumstances prevent them from boarding at the beach. On short vacations, or at times when high ocean waves are inhospitable, surfers can leave the sandy shores and head for the hills to find their adrenalin fix in the mountains’ raging rivers.