Puhsarang: The Lourdes of East Java 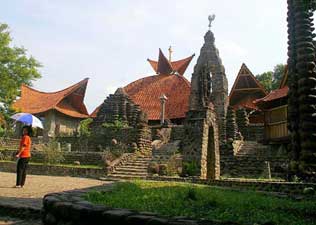 In July, a mob of Muslim radicals reportedly forced the cancellation of an international religious gathering at the Karmel Valley Catholic retreat in West Java.

There is a similar retreat in East Java based in a Muslim area. But in this case interfaith relationships are said to be good.

There are about 6,000 households in the village of Puhsarang on the slopes of Mount Klotak. Around 20 percent are Catholic and another 5 percent Protestant. That is a significant number because nationally Muslims are supposed to form almost 90 percent of the population.

Worshippers who go to the monthly midnight services held on the eve of hari jumat legi (Friday in the Javanese calendar), certainly are not short of prayer room, though hundreds of outsiders normally pour into the area. At Easter, 17,000 people turned up — many staying overnight in the hotels and guesthouses that cater for the influx. There is also a campground. For Puhsarang is a sacred place for Catholics with 14 hectares of statuary, chapels, a grotto of Our Lady, graveyards, a cave, water gushing from a rock, a columbarium and a mausoleum — the only one in East Java.

Here the bones of bishops and many priests lie close to the ashes of people who have chosen to be cremated and remembered in this lovely place.

Sounds a bit like Lourdes, the town in the French Pyrenees where five million pilgrims come every year seeking cures? You are not wrong. Much has been done to replicate that famous attraction, including several sets of paintings donated by the French.

Puhsarang has yet to produce a Bernadette Soubirous. She was the teenager who claimed to have been visited by the Virgin Mary several times in the mid 19th century and turned Lourdes from a place of no importance to a center of faith and healing. (The sesquicentenary is next year.)

Puhsarang may not have a visionary, but it does have what the locals call “holy water”. Like Moses you can smite a rock wall alongside the grotto, and out it gushes.

The cautious and concerned, who know that to keep your stomach intact you do not drink from taps or springs in Indonesia, may be wary of sipping. Fear not — it has already been sterilized by ultra-violet light. Faith is fine, but in matters of hygiene even the devout trust in technology.

Local religious teacher Maria Magdalena Kasri Evayanti said the pilgrims came from many parts of the archipelago and were mainly ascetics seeking a spiritual experience.

“We follow the Javanese calendar because this fits in with the Catholic tradition,” she said. “Though no miracles have been officially authenticated, many people say they’ve been cured of sickness after using the water.”

Inevitably Puhsarang has become a tourist spot, and the deputy head of security Jacobus Sugeng knows immediately the religion of visitors without even asking, not that he makes such personal inquiries.

“Muslims come to picnic and enjoy the surroundings,” he said.

“They pay no attention to anything else. The Protestants look at some of the holy objects though not too seriously. “Only Catholics show reverence, take bottles of water, pray in public and know which way to follow the Stations of the Cross.” These are 15 sets of gold-colored statues on a long walk through the landscaped gardens showing the traditional story of Jesus’ progress from condemnation through crucifixion to ascension. Curiously it’s the final empty cave with no statues that has the most emotional impact, not the figures in frozen poses at the other 14 locations.
Each figure cost Rp 5 million (US $560) and the artists were all Muslim, according to Jacobus. Five of his 16 staff are Muslims and Muslims run many of the food and souvenir stalls that line the walkway into the complex.

So do not assume because someone is offering you a plaster saint or an illuminated missal he or she is an adherent to the Church of Rome.

There has been plenty of strife between Christians and Muslims in South Sulawesi, Ambon — and more recently in West Java. But Puhsarang has escaped sectarian violence — probably because it’s open to all faiths and supports so many non-Catholic households. Puhsarang is promoted by East Java tourist authorities who are particularly proud of what they call the antik church. Although this translates as antique it can also mean eccentric. This is more accurate because the building is only 70 years old and was extensively rebuilt in 1999 in a most curious and imaginative style.

If you are not a Catholic and find much religious art to be kitsch you may be put off from a visit to Puhsarang. That would be a mistake because the architecture and engineering of the church and adjacent buildings are well worth the trip.

For the huge roofs are unsupported by multiple uprights, beams, bearers or cross members. Instead at each corner are big steel pillars leaning back to take the weight of tons of terracotta tiles.

They do this through thin steel rods that replace wooden slats, the standard way to carry the weight of tiles. The design is known as wireframe, and it’s impressive. The rods sag between supports giving the roof a dished appearance, as though the whole structure is about to cave in. This is supposed to resemble the style of the Majapahit era, the Javanese kingdom that ruled this area 700 years ago. Some of the terracotta tiles have been replaced with glass in the shape of a cross, creating a powerful image using natural light. Elsewhere the walls and pathways have been made of river-rolled stones. A bit uncomfortable underfoot, so wear stout shoes.

(Pohsarang is about two and a half road-hours southwest of Surabaya. The route is far from the Lapindo mud volcano. To book accommodation e-mail lkd-ris@indo.net.id)