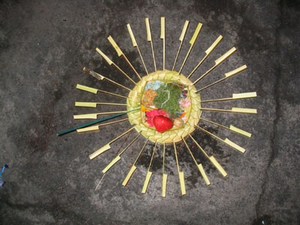 Setting foot for the first time in Bali, the intense religious atmosphere in the island is palpable.The smell of the air is different — it has a subtle scent of screw pines and burnt incense. And everywhere, on every street corner, and in front of every small shop, offerings can be seen. The most common form of offering everywhere in Bali on a daily basis is known as canang, formed from a coconut palm leaf square basket filled with a slice of banana or sugar cane, a few grains of rice, a betel quid, vibrant hues of flowers and shredded leaf on top.

Presenting banten (Balinese for offerings) to the unseen inhabitants of the island gods, ancestors and demons — is a huge part of Balinese Hindu rituals.

The various types of offerings number in the hundreds and include gifts to express gratitude to benevolent spirits. At the same time, these gifts placate demons to prevent them from disturbing the harmony of life.

Balinese Hindus spend much of their time and money offering rituals.

“It’s a form of gratitude, for the rice on the table, for our well being,” said 23-year-old Ni Luh Suryati, who places banten every morning and afternoon.

As more Balinese women work outside their homes, entering the public domain, they have less time to prepare the offerings themselves.

This created a market of ready-made offerings made by tukang banten (offering makers).

“One household spends around 20 to 30 percent of their income for ritual consumption,” he said.

“This is enormous as more than 80 percent of Balinese are Hindu,” he said.

The research said this trade in Bali was worth around Rp 1.4 trillion per year.

“This is a really big part if the informal sector of the Balinese economy,” he said.

“It creates jobs and it also opens up chances for trading with other areas in Indonesia for offerings material,” he said.

At the gate to the Badung market, in the center of Bali’s capital city Denpasar, dozens of traders sell offering materials, including flowers, bananas, sugar cane and young coconut leaves.

Bali provides itself with a supply of flowers for offering materials and regencies including Buleleng and Karangasem are the main flower suppliers.

Coconut leaves and fruits are imported from Java.

Inside the market, the scent and the view was unlike the traditional smelly markets in other cities.

The familiar scent of screw pine and incense mixed with the scent of flowers filled the air.

In every stall there was a small shrine made of wood with canang inside it and incense burning. Here, people buy the ready-made banten.

For big ceremonies, however, complex banten are made.

In her house in Denpasar, banten-maker Ida Ayu Cahyani said her orders were worth around Rp 5 million to Rp 20 million.

Early this week she had five workers gathered along with her family and neighbors to help her fill orders for a ceremony in the Garuda Wisnu Kencana.

She bought all the materials at the Badung market.

“It is a good business, but more importantly one with blessings,” she said.