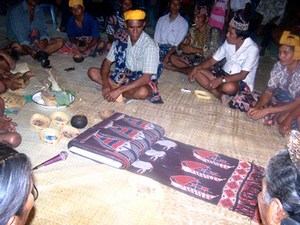 It was a drizzly afternoon and 42-year-old Umbu Anton sat idly by the corridor of the main gateway into Waingapu market. Lengths of ikat (woven textiles) from East Sumba lay neatly in a pile in front of him, while other textiles he was selling hung displayed on the wall behind him. Most of the woven fabrics had horse, skull, crocodile or dog motifs. Next to Umbu Anton, Umbu Jonathan was also selling textiles, which were laid out in a similar fashion. Anton and Jonathan have been selling ikat for more than ten years; the profits feed their families and send their children to school.

“Thanks to these textiles, I can afford to send my children to school, up to senior high school level,” Anton said.

Anton buys the textiles from a number of weaving centers in Nggongi, which is about 60 kilometers to the north of Waingapu, and Lambanapu, some 7 km to the east of Waingapu according to Emanuel Dapa Loka.

Both traders said they had recently experienced a drop in the number of buyers.

A drop in the number of buyers, Fidelis added, was due to the fact that some vendors sold fake ikat.

“Once someone gets cheated, they are reluctant to buy again as they don’t believe what is being sold is genuine ikat,” said Fidelis, who comes from Manggarai, in East Nusa Tenggara.

If people want to buy genuine ikat, he said, they prefer to go to production centers or visit ikat workshops.

Fidelis said it was necessary to promote ikat in an event, such as the one recently held by the Council for National Handicrafts Indonesia (Dekranasda)’s East Sumba office, which introduced two of Sumba’s longest pieces of ikat.

The two textile pieces were the 50.10-meter-long Hinggi and the 24-meter-long Lawu Pahikungu.

Meanwhile, the full name of the second textile is Lawu Pahikkungu Maronongu. Lawu means sarong, pahikkungu means to raise — in the sense that during the weaving process, the motif is raised using a coconut palm frond — and maronongu means angels. Put together, this ikat’s name means “because of its beauty, this sarong is fit for angels”.

It took about six months to produce the two ikat. Close to 100 people were involved in the production of the pieces and they worked every day from morning to the late afternoon.

The two pieces have made it into the Indonesian Museum of Records (MURI) as the two longest ikat.

“This will attract people from outside Sumba to come to Sumba. In the end, it is the local people who will enjoy the benefits. I praise Dekranasda for this achievement,” Fidelis said.

“We hope these works will make people stop associating Sumba with Sumbawa (in West Nusa Tenggara). This way, people will be reminded that Sumba is quite different from Sumbawa,” he said.

He added the record would encourage local people to produce high-quality Sumba ikat.

“Since long ago, our people have woven fabrics and we have inherited this extraordinary handicraft skill.”

Mehang called on related institutions, including churches, to take an active part in the development of Sumba’s woven fabrics.

“I have often told the priests that our Christian faith must be rooted in the culture of Sumba,” Mehang said.

Dekranasda’s chairperson, Sylvia Anggraeni, said the idea to make the longest ikat was a challenge set by MURI’s Jaya Suprana.

She said Jaya Suprana asked her to produce a 100-m-long ikat during an exhibition at Bentara Budaya in Jakarta.

“However, owing to the high level of difficulty, the two ikat we created measured only 50.10 m and 24 m long,” Sylvi said.

She said the people of Sumba uphold a mutual cooperation philosophy, as could be witnessed in the production of the two ikat.

Sylvi, who is not from Sumba, fell in love with Sumba ikat long ago.

“When I saw the motifs and learned the meaning behind them, I fell in love with these fabrics,” she said.

“Sumba people should be very proud of their culture and cultural products.”