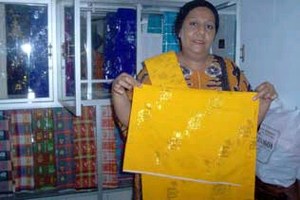 Most people associate traditional weaving techniques with Sumatra, but in Donggala regency in Central Sulawesi another weaving industry should be equally famous. Buya sabe, or woven sarongs, are woven by women in the traditional manner on a loom in Donggala. It can also be made by machine in modern factories, although only in Java because no such factories exist in Central Sulawesi. Designs include motifs of animals and plants, and clothing can be tailored to make formal dresses and funeral attire. In Towale village, in the Banawa sub-district of Donggala regency, weaving has become a routine activity for all the local mothers. Every home has at least one loom, and the Donggala weaving women in Towale are well-versed in their craft, having inherited the skills from their mothers.

In Towale about 300 people are employed as Donggala sarong weavers. Donggala sarong-making techniques are similar to those employed in other regions, from the thread-coloring process through to the weaving. The weaver Dayama said the processes used in the Donggala craft depended on the motifs used. Employing different manufacturing techniques and motifs, the women can make six different styles of Donggala, including those known in the local language as palekat garusu, buya bomba and buya sabe.

Dayama said the complexities of the buya bomba motifs were the most difficult, extending the manufacturing period from one to two months. Sarongs using other motifs take from one to two weeks to complete. “If we are weaving buya bomba, we have to work so very carefully because we have to include so many motifs. It usually takes two weeks,” said Dayama.

The Donggala regency administration has recently implemented measures to preserve Donggala weaving skills and designs by collecting the work of craftswomen in the area. local regulation has been introduced to make sure Donggala weaving can be preserved and not duplicated by others. In that way it is like a Donggala patent,” said Donggala Regent Habir Ponulele.

The Central Sulawesi province administration recently passed a law requiring government public servants to wear uniforms made of Donggala woven cloth on the last day of the working week according to Ruslan Sangadji.