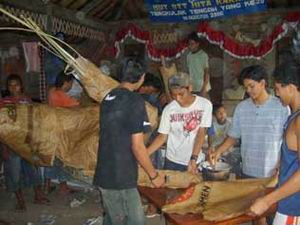 On the 18th Maret is the night before Nyepi, the night when fearsome monsters called Ogoh-Ogoh are paraded through the streets of towns in Bali to scare away the evil spirits.

Village communities across Bali are joyously preparing for the most important Hindu holiday on the calendar, Nyepi, or the Day of Silence, which marks the beginning of the Balinese-Hindu New Year as Trisha Sertori explains.

One age-old Nyepi tradition is the making of monstrous sculptures from paper-mache‚ and wire called ogoh-ogoh.

Come Nyepi eve, these marvelous monsters have their work cut out for them, chasing down evil spirits lurking at T-junctions and crossroads, hiding behind trees lining main roads or perched on the roofs of sidewalk cafes.

A few kilometers outside of one of Bali’s tourist hubs, the artists’ village of Ubud in Gianyar regency, a group of young men gather each evening to build their community’s ogoh-ogoh with donated paper, cardboard, chicken wire, glue, paint and lots of laughter.

According to Wayan Gede Karang, spokesperson for the community’s sekaa teruna, a youth group for young men, this year is particularly special for Tengkulak Tengah, as ogoh-ogoh had been banned for the past five years.

“Five years ago, there was a misunderstanding and our banjar (community) made a couple of ogoh-ogoh instead of just one. It became competitive. On the eve of Nyepi, when we were carrying the ogoh-ogoh through the streets there was a lot of pushing and shoving, and one group tried to overtake the other causing a collision. We ended up having a fight, so the community leaders banned ogoh-ogoh until now,” said Wayan. He added that only one ogoh-ogoh was being made this year, with the entire community pulling together in its creation.

And it is this community spirit that Wayan believes is one of the most important aspects of the ogoh-ogoh tradition. The custom stretches back centuries to Javanese-Hindus, who brought the ogoh-ogoh rites to Bali with the collapse of the Hindu Majapahit Kingdom more than 500 years ago.

“Hindus brought this tradition from Java five or six centuries ago. Of course there have been significant modifications in implementing these rites and ceremonies, but the bonding between people is still a very important element,” said Wayan.

“Everyone gets involved. The village carpenter helped build the base, other people gave whatever they had at home to help in making the doll, others gave money and the people constructing the ogoh-ogoh give their time.

“We come together every evening to work on the doll and I feel this rebuilds the friendship, fraternity and brotherhood of our village; it’s community spirit that strengthens the bonds among members of this youth organization,” he said.

And with the ogoh-ogoh weighing in at more than 250 kilograms, those bonds of friendship are needed to parade the doll through the streets, perched on bamboo poles atop the shoulders of more than 50 young men who turn and manipulate the ogoh-ogoh and make it dance.

“When the big day comes, the women will prepare offerings of blood, cooked meats and other sacrifices to drive away the evil spirits from their homes. This lowers the elemental forces, the invisible forces created by God that influence people and cause them to have strong emotions and opinions,” said Wayan.

While it may sound all fun and games, the rite carries a deep spiritual significance.

“When the evil spirits reach the streets, they are driven northwards from our southern border. Every village has two borders, either south and north or east and west,” he explained.

“Here in Tengkulak Tengah our ogoh-ogoh drives the evil spirits out to the north after the village priest has prayed at each crossroad and T-intersection.”

Wayan pointed out that the ogoh-ogoh were much more than simply monstrous effigies: They are spiritually charged by the priests, giving them much greater power than is imagined by onlookers.

“The essence of the ogoh-ogoh is not just their decoration and the display of local men’s strength in carrying the dolls. We want to clean our village of the invisible, evil spirits dwelling here. We cleaned the village in other ways when we could not make the ogoh-ogoh, but we believe our cleaning is more powerful with the doll,” he said.

“And it does feel different after the ritual. This cannot be proven only by the naked eye, but we believe there will be a change in people; a rise in positive energy and a sense of goodness in our village.”

And if the jocular camaraderie enjoyed by the boys of Tengkulak Tengah during the making of their ogoh-ogoh is any indication, it appears this sense of shared goodness is already manifest.