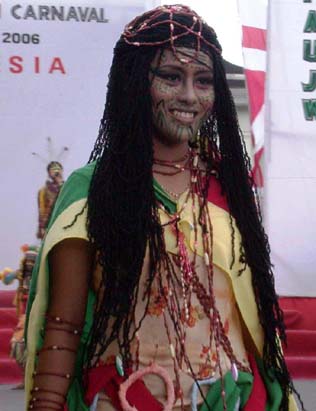 If you are traveling to East Java this weekend or next, drop by Ponorogo to catch cultural parades and the reyog or mask folk dance festival. Or, if you prefer something more modern, come to Jember to witness what organizers are calling Indonesia’s Rio de Janeiro Carnival.

Organizing committee chairman Gunardi said that the Ponorogo cultural parades will take place from August 7 to 13 to coincide with the town’s 511th anniversary.

Ponorogo is located some 180 kilometers west of provincial capital Surabaya.

At least 23 reyog troupes from all over Ponorogo regency are expected to showcase their feats in the festival.

According to Gunardi, although the troupes have the same sets of equipment like dadak merak (a tiger mask topped with a feather-spreading peacock), gamelan instruments and a bujang ganong (servants mask), they are expected to have their own characteristic dancing styles and spellbinding acrobatic tricks.

“The existing artistic talents will be on show,” said Gunardi.

The Jember’s street fashion show festival, on the other hand, will take place on Aug. 5.

Jember is located some 200 kilometers southeast of Surabaya.

Dynand Fariz, the man behind the program, said the Jember Fashion Carnival (JFC) boasts alternative fashion designs and genuine works of apparel trendsetters in this near eastern-tip city of East Java.

This year’s event will be highlighted by a street fashion parade spanning 3.6 kilometers in the city’s main thoroughfares.

Eight groups of models — each has 450 personnel — will be involved in the street fashion show. Each group carries different themes, including humans, animals, plants, water and imagination.
Dynand said some 150,000 people of all ages are expected to watch the big show, the sixth in Jember.

One of the groups participating in the fashion show is the Borneo Group, which will open the fashion parade by presenting Kalimantan’s exotic wildlife. This theme is inspired by the fact that the Indonesia’s largest island is under the threat of environmental destruction.

“The Jember Fashion Carnival wishes to remind citizens of the need to protect against the imminent extinction of Kalimantan’s natural and cultural riches,” Dynand stressed.

The last group, Recycle, will present designs with material for recycling purposes.

Dynand said JFC was trying to convey the idea that the negative impact of non-recyclable goods could be reduced by recycling these products.

“This event may arouse public awareness,” he added.

The JFC, which has been held annually for the past six years, has made its way into the list of top-level agendas which include the International Congress in Bandung, the Cultural Pageant at the State Palace, the Kuta Carnival, Bali Fashion Week and Kutai Kartanegara Parade.

“What makes us very proud is that we were invited and took part in the International Scout Jamboree in London from July 25 to 30,” Dynand said.