Pollution on the Streets: Bali 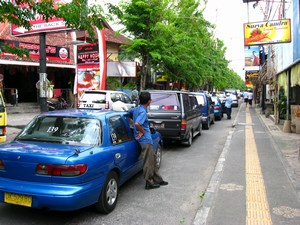 Let’s face it, mass tourism has produced a lot of problems for the ‘paradise island’ and none more so then the crap that is spat out of exhaust pipes. It’s not only the trucks leaving massive clouds of greyish-black smoke to choke you, it’s the constant traffic jams. There really is no plan in sight for this ever-growing problem but a lot could be solved if a majority of cars and especially taxis used environmentally friendly products. That is, convert to alternative methods instead of fossil fuels. I read an interesting article in Ecotravellougue about such a project where hybrid cabs were a success. All Bali has to do now is sort out the plastic waste problem!