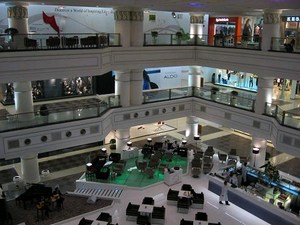 With tough competition from shopping attractions in neighboring countries, Central Jakarta’s Plaza Indonesia — one of the city’s oldest modern shopping centers – acknowledges its loyal customers have helped it stay in business for 18 years. Established in March 1990, Plaza Indonesia targets the city’s “specific, sophisticated and elegant” consumers who, from time to time, keep coming back for more. Plaza Indonesia is one of many shopping malls in Jakarta which targets the middle to upper economy brackets. Other malls include Taman Anggrek in West Jakarta, Senayan City and Plaza Senayan in Central Jakarta, Kelapa Gading in North Jakarta and Pondok Indah in South Jakarta.

“Support from high-end customers has been one of the essential factors enabling us to become a world-class shopping center,” Plaza Indonesia operations manager M. Sjohirin said.

“Our customers nowadays are very demanding and have higher expectations than they did in our earlier years, but so far we have managed to adapt,” Plaza Indonesia executive marketing director Mia Egron said.

With easier access to overseas travel and competitive services from other shopping centers in the region like Singapore, Kuala Lumpur and Hong Kong, Mia said, Plaza Indonesia must keep up with market demands to offer up-to-date and complete choices of high-end goods as the Jakarta Post article explains.

“Or else they could easily go overseas instead,” she said.

For Plaza Indonesia to acquire a prominent position in the region, it would need to have a more comprehensive range of international brand outlets, providing more choices of merchandise with competitive pricing.

“But other factors also play a role for this to happen,” Mia said, referring to government policies and the condition of the tourism industry in Indonesia.

Another upscale shopping center, Grand Indonesia, located just across the road from Plaza Indonesia, is currently under construction and due for completion soon.

One of Plaza Indonesia’s long-time tenants, PT Mahagaya Perdana, was satisfied with business dynamics at the plaza.

“Business here has been very good and promising for us,” said Emelyn Siswanto, operations manager of Hugo Boss fashion outlet — one of Plaza Indonesia’s first tenants.

Celebrating its 18th anniversary, Plaza Indonesia has launched a new section, allocated especially for its prime retail stores, including international brands like Emporio Armani and Chloe and outlets of renowned local designers like Sebastian Gunawan and Obin.

The shopping center is also doing major renovations on its appearance and facilities and is preparing to add 25,000 square meters of tenant space to its existing 40,000. The renovations are due for completion by the end of the year.