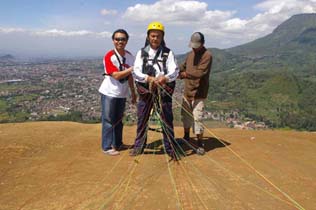 For Malang lawyer Sunu Setyonugroho, who has a deep and irrational fear of heights, there’s only one cure. He goes halfway up Mount Banyak at Songgoriti, Batu, East Java. He stands 1,300 meters above sea level, quivering on the edge of a sheer drop, far above a lovely patchwork landscape of tilled fields and ocher-roofed hamlets.

Then he runs and jumps.

Don’t try this unless you’re attached to a filigree of hair-thin cables connected to an airfoil, a long billowing pillow of polyester called a wing. It’s also useful to have a good understanding of air currents, weather patterns, thermals and cold fronts.

Then you can just sit back in your harness on Cloud Nine for an hour or more, salivate over the view and contemplate the majesty of the universe as you pity the ant-people busy hundreds of meters below.

The only noise is the air slipping through the wing that you can steer with a gentle tug on the cables.

Eventually we all have to come down to earth. If you’re really skilled and don’t get caught by a sudden gust, you can glide precisely into the center of a 10-meter diameter circle at the landing field.

If you’re not then you can vanish into a patch of high-stalk corn or tumble into an irrigation ditch.

Only a couple of contestants at the Batu Open Paragliding international event staged in late July came a cropper. These mishaps garnered giggles, though no one sought the farmers’ opinions.

Most pilots, like the Malaysian team of five — including two women, for this is a unisex sport — managed to get impressively close to the target.

They neatly dodged the onlookers who cluttered the field, indifferent to the possibility of getting a head kicking by a pilot coming in too fast.

Although the paragliders seem serious about safety, wearing all the right protective gear so they look like First World War bi-plane fighter pilots, it’s the adrenalin rush that keeps the contestants coming.

Retired Malaysian commando Basit Bin Abdul Rahman, 56, can no longer get his kicks from a Kalashnikov so he wanders the world looking for the best launch spots.

“Peninsular Malaysia is too flat and there are too many trees in Sarawak,” he said. “I’ve paraglided in South Korea and Taiwan and at Lake Toba in Sumatra, but this site in Batu is very good.

“If not careful, paragliding can be dangerous. But if you’re mentally and physically fit and know what you’re doing, then it gives great peace of mind. You can forget your problems up there.”

At 13 Nur S B Sahar seemed too young to have problems, but being a teenager has its own traumas. She also said paragliding helped her to get a better perspective on the world, both literally and metaphorically.

“I crashed once coming in to land and bruised my leg,” she said. “My parents support me, but worry and urge me to be careful. This is my third competition.”

Paragliding looks elite because you can spend around Rp 20 million (US$2,200) or more on the gear. Then come the training expenses, for this activity is well regulated; you can’t just fling yourself into the yonder unless you intend making an exit statement.

Radio contact with the support staff who control the field has to be maintained. It costs around Rp 200,000 a session to fly tandem with an instructor. Allow 10 days for training to a basic proficiency level.

In Batu, the local government has been smart enough to realize the tourist potential of their topography. The 3,000 square meter landing field, the paved road to the jump site and a shelter have all been paid for by the city administration.

Like nature and a vacuum, bureaucrats abhor silence. This led them to install a huge sound system at the event, blasting totally forgettable “music” across the landscape. They couldn’t understand that paragliders are nature lovers seeking to be at one with the environment.

On the positive side, a dozen little lads had been trained to expertly fold the wings for Rp 1,000 each, leaving contestants free to unzip, unwind and find their feet.

Although the winged ones from across the world who come to Mount Banyak are high-fliers, that doesn’t mean they’re big-spenders. At night they prefer to bunk down in low-budget hotels where they can swap yarns about up-draughts and down winds.

There’s a camaraderie about paragliding that brings disparate folk together. Like serious surfers, they tend to be individualists, mostly professionals, in search of a special and exhilarating experience.

They travel with a purpose and like to test themselves. When they’re really in their element, their souls also soar.

In the air they are all grace; on the ground with a 15-kilogram wing packed on their back they look like biped turtles. With a GPS (global positioning system) in their pocket they know where they are by latitude and longitude, rather than through political geography. Add a passport and credit card and the quest for freedom is under way.

Dwi Rubingi discovered paragliding in 1999 when he worked in New Zealand where extreme sports are popular. When he returned to East Java he had enough money to build a motel close to Mount Banyak, hoping paragliders would drop in.

“This is a great site because you can go out almost every day,” he said. “In NZ we could fly on only three months every year.
“Wind speeds are checked before taking off. If it gets stronger than 20 kilometers an hour you could find yourself going backwards.

“The best paragliders tend to be the French, though the Chinese are also very good. In places without high mountains paragliders add lightweight motor-driven propellers to their gear to the distress of the purists.

“The world record of covering 426 kilometers was achieved in South Africa. (The Indonesian straight distance record is 44.5 kilometers, set in Wonogiri, Central Java.)

“The sport is probably most developed in South Korea where much of the gear is now made using new high-tech materials.”

The 30-square meter crescent-shaped wings aren’t parachutes. On the leading edge is a honeycomb of cells that fill with air and provide the lift.

Anything less than 20 kilometers an hour and you could stall, anything more than 60 and you’re really moving. The safest maximum height is 3,000 meters, though going higher and faster is part of the game.

Finally, what about our vertigo-challenged lawyer who introduced this story? Sunu says he has no problems paragliding but still doesn’t like standing on the edge of high buildings.
Well, not without his wing.

For more information, including a club and site near you, check www.paragliding.web.id