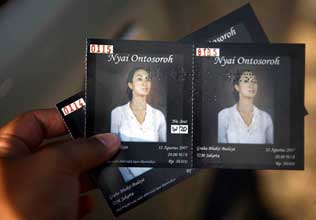 After being performed in eight cities in Java, Kalimantan and Sumatra, a play titled Nyai Ontosoroh will be staged for Jakartans at the Taman Ismail Marzuki arts center in Central Jakarta on Aug. 12-14.

Written by scriptwriter/producer Faiza Mardzoeki, Nyai Ontosoroh is an adaptation of Bumi Manusia (This Earth of Mankind), a novel by renowned author Pramoedya Ananta Toer.

“Nyai Ontosoroh is a figure in the novel who has a strong personality. She provides inspiration. Overall, the novel has some dramatic elements that drove me to bring them to the stage,” Faiza told a media conference.

Bumi Manusia, Faiza said, is a very interesting novel as it provides historical information about Indonesia. It also presents the struggle of a woman against subordination in colonial times, she explained.

An fan of Pramoedya’s works, Faiza spent almost two years on the script. After finishing it, she then offered it to theater troupes in several cities.

To her surprise, most of the theater troupes she met gave positive responses and staged the play between December 2006 and March 2007.

“The show in Jakarta will be the climax,” Faiza said.

For this project, Faiza has worked together with director Wawan Sofwan and co-producer Andi K. Yuwono. The main character, Nyai Ontosoroh, will be played by artist Happy Salma, who is also an admirer of Pramoedya.

Wawan said he immediately accepted the job when he was asked to direct Nyai Ontosoroh in March.

“I accepted the offer as I liked the script. We had four months for rehearsal. I appreciate the good cooperation among team members. We will do our best for the audience,” he said.

Meanwhile, Andi hailed the hard work of all 125 crew members, and expressed the hope that the audience would enjoy the performance.

According to Faiza, the Jakarta audience has been enthusiastic about the play. About 80 percent of the tickets for the three-day performance have been sold out.

Nyai Ontosoroh is a joint production by several non-governmental organizations, and has been sponsored by a number of private firms and foreign embassies.