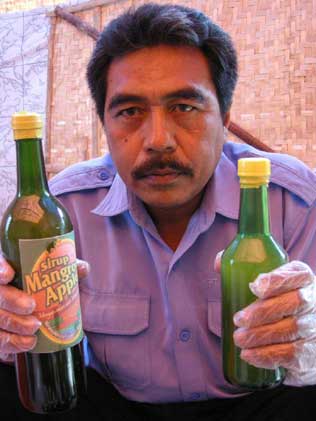 While felling mangroves in coastal areas of East Java, Mochson, 42, the head and coordinator of the Farmers Mangrove Conservation Group in Wonorejo, Rungkut, Surabaya, hit on the idea of using mangroves as an economic commodity without damaging the plants. Felling and pruning damages around 450 hectares of mangroves every year in the Sidoarjo region, according to data from the Forest Regrowth Movement and the plantation section of the agricultural department of the Sidoarjo administration.

The mangrove trees that are felled are sold to brick-making industries in Mojokerto, East Java, for fuel to fire the kilns. Apart from the felling activities, mangroves are also damaged through mismanagement as has happened in some areas near Surabaya.

“Back in 2003 in the Surabaya region many mangrove plants were also cut and the wood was sold,” Mochson said.”The loggers didn’t replant, so the mangrove forest was damaged.”

Mochson later had the initiative to plant mangrove trees in an area not far from his home, buying the seeds with his own money.

Although his budget did not stretch far, he was able to
rehabilitate much of the degraded ecosystem. Mochson’s ideas were deemed crazy by his neighbors. They mocked him behind his back, mouthing the words he said as if they had heard them often. But Mochson was determined and never gave up.

One by one, he persuaded the people around him that this was a cause they should support. Eventually he formed the Farmers Mangrove Conservation Group with around 20 people.

The group spread the word, persuading others to plant mangroves in the damaged coastal area from Wonorejo, Rungkut, to Keputih, Surabaya. Every member of the group makes a monthly contribution to buy mangrove seeds.

One day when Mochson was passing through a mangrove forest, not far from a mangrove nursery he had established, he noticed a family of monkeys eating mangrove fruits. Without giving it much thought, he also sampled the fruits and discovered they could slake thirst.

“Please try this drink. Many of my customers say it tastes like a mixture of Yaman honey and passion fruit. This syrup makes you healthy. It helps relieve breathing problems, and prevents mouth ulcers and fevers,” Mochson said.

Mochson’s claims may well be true, but this correspondent has yet to taste Yaman honey, which is said to cost around Rp 2 million (US$ 215) a liter. But it can be said that on the palate Mochson’s drink tastes more like local honey from Trawas or Batu near Malang in East Java.

The drink comes from the fruit of mangrove tree varieties known as Sonneratia alba and Sonneratia caseolaris. The roots of these plants are also used to make shuttlecocks for badminton.

Apart from its fresh taste, the drink has also been trumpeted as a natural medicine that will free smokers from their habit. After consuming the drink the yearning to smoke is said to vanish because the taste stimulates the production of saliva. This drink can also be made into an intoxicant; the sediment left after the fruit has been processed can be fermented to produce light alcohol.

Besides Sonneratia, a type of Avicennia mangrove, the fruit can also be used in the manufacture of crackers and a traditional sweet drink called kolak. However, other varieties of mangrove like Xylocarpus grantum cannot be processed into food or drink because no one has proved they are edible.

“I haven’t been selling this drink at the market,” Mochson said.

“We only make this drink when there’s an order. The last orders came from the East Java Forestry Department and the Surabaya Institute of Technology (ITS).”

The drink made by Mochson and Riati does not have a brand name; nor has it been approved for sale by the health department. But the drink has been tested in the ITS biology laboratory, which confirmed it is fit for consumption and highly nutritious.

The recipe for Mochson’s drink also won a prize at the XX National University Student Scientific Event held in Lampung in July.

The story goes that some university students knew about the product. Later they put in an order and asked Mochson to teach them how to make the drink. The students then asked for permission to include the drink in the competition.

“I didn’t expect to be successful,” Mochson said. “It was never my intention to start a business.”

After the drink started gaining popularity, some friends suggested Mochson apply for a brand name and a health certificate.

“But I don’t have any experience in such matters because I’m not a clever or capable business man,” he said. “But there is a colleague who is trying to arrange for the registration of a brand name and will help with sales and distribution.”

Mochson only has a senior high school education. The word is getting around. Now it is known that mangrove fruits can be processed to become a food product with economic value, coastal people are becoming aware of the need for the preservation of the trees.

Some groups have started cultivating mangroves and stand guard in the mangrove forest to prevent the illegal harvesting of the timber. People sell fruit from mangrove plants that have been cultivated by Mochson for processing. One mangrove fruit cost Rp 75 (less than one US cent).

Despite his many activities, Mochson’s life is very simple. After working for six years with the National Land Department (BPN) in Bojonegoro, he resigned and chose to work as a fruit truck driver and a cameraman taking snaps for tourists.

His income is far less than the wages he got when he was employed by the BPN. Now he works as a land surveyor for a property company that is not well known in Surabaya. His wife runs a rice warung (food stall) in front of his house in Wonorejo Rungkut, Surabaya.

“I’m a man who doesn’t like working under pressure from the boss,” he said. “I’m a person who is strong on idealism.”