Bandung is one of my favourite places in Java and is located in the cool of mountainous areas. It is the capital of West Java and is the fourth largest city in Indonesia and rated the fastest growing city in the country. Most of its residents are Sundanese and the Sundanese language is spoken a second language after Bahasa Indonesia and it is commonly used as an informal language for communication in streets and markets. Bandung has so many attractions and is colloquially known as ‘Jeans City’ for good reason. This is apparent with the cheaper fashion shops located in factory outlets along Jalan Cihampelas. The city is also known for its cultural and artistic aspects. Put that together with the friendliness of the local people and you know why I like this city so much. Bandung also has some interesting museums and galleries.

Interestingly this place is located in a side of Gedung Sate and houses a collection of fine international and Indonesian stamps as well as other postal items.

Excellent place if you are into geography and geology. The museum houses an excellent collection of fossils, ores and minerals, skeletons of fossilised animals, full dinosaur skeletons, as well as a Mammoth skeleton. The museum also has an excellent replica of the skull of Java Man found in East Java in 1896.

Displays include paraphernalia from the WW2 independence struggle including weapons, photographs, flags and uniforms. If you are interested in the independence movement in Indonesia then this place you will like.

This museum exclusively commemorates the Asia-Afrika conference that took place in Bandung in 1955. there are photographs and documents from this conference.

Bandung is renowned also for its fine artists and galleries, Among the galleries that are worth visiting include the Barli Art Museum, Galeri Bandung and Galeri Hidayat, to mention a few.

The city also has some fine photographers. One photographer that particularly impressed me was Guntur Purwanto Situmorang. He has an excellent eye for composition and his works are extremely popular. Here is one of his photos: 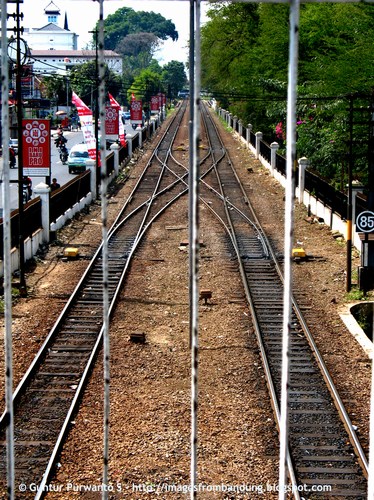