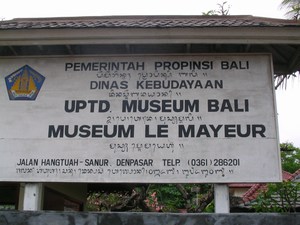 The Museum Le Mayeur in Sanur is definitely a must-see place in Bali for the simple reason that some of Belgian artist Andrien Jean Le Mayeur‘s finest paintings of his lovely wife Ni Pollok, who often modeled for him, are housed here. Located just steps away from Sanur Beach, the museum is flanked by the Grand Bali Beach Hotel to the south and Pura Dalem (Temple of the Dead) and the Diwangkara Hotel on the north. The museum features a good variety of the artist’s paintings in both oil and water colors. Most of his paintings are of his wife Ni Pollok or other young Balinese women in various states of repose or doing traditional crafts such as weaving. La Mayeur’s works capture the natural beauty of Bali and its culture long ago. With each brush stroke the viewer can envision the passion he had for his art and his wife Ni Pollok. 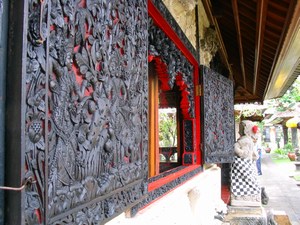 Besides paintings, the museum also has many household items on display including an elegantly carved octagonal teakwood table, elaborately carved cupboards, vases, and many more. There are also several decorative plates and ceramics according to Michele Cempaka. The museum was originally Le Mayeur’s home, but as his fame grew, high ranking authorities including former President Soekarno, former Indian Prime Minister Jawaharlal Nehru and many others came to visit him. In 1956 the Indonesian minister of education and culture visited Le Mayeur as well, and was so impressed by Le Mayeur’s paintings that he asked Le Mayeur if he would consider allowing his home to be preserved as an official museum. Le Mayeur agreed and began to produce even more paintings which he wanted to be included in his collection of work. 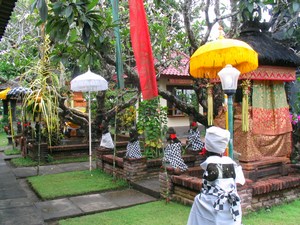 In the beginning, there were only two buildings — the main house and a kitchen. Later, a storage building for Le Mayeur’s paintings was constructed behind the main house. The buildings are simple but have an artistic flair which embodies Le Mayeur’s aesthetic and love of beauty. There are several exceptional shrines scattered in the museum’s grounds and the shrine in the front near the entryway is particularly beautiful — over time a tree has woven its branches around it. Next to the smaller building are two busts — Ni Nyoman Pollok with her husband Adrian Jean Le Mayeur De Merpres. The busts sit under a small pavilion which overlooks a lovely water pond. Across from here is a Bale Bengong — a traditional open air pavilion where La Mayeur would often find inspiration to paint. Ni Pollok later used this area for preparing offerings, dance training and weaving, although originally she had utilized the smaller building, which was called Bale Pecanangan.

The story goes that Le Mayeur met Ni Pollok when she was still a child. She was an excellent Legong dancer who regularly performed at Pura Prajurit — a temple for the dead heroes, which is near the home he rented in Sanur. Shortly thereafter, she began modeling for him and their relationship deepened. They were married according to Balinese tradition in an Adat Hindu ceremony. She loved him very deeply and wanted to have a child with him as evidence of their love, but Le Mayeur didn’t want to have children; instead, he preferred that she preserve her beautiful figure so that he could continue to memorialize her in his paintings.

After Ni Pollok’s death in 1985, the museum was taken over by the Indonesian government. For several years the paintings were neglected, resulting in deterioration, but by 2003, Mr. Ketut Naria made an appeal to the State Ministry for Culture and Tourism, through the deputy assistant of art, Surya Yuga, that Le Mayeur’s works be immediately restored. In 2003 a restoration team was brought together for the purpose of restoring all of the paintings in the Le Mayeur Museum. While conditions have improved, there are still several paintings which are in need of attention.

The museum is open to visitors: