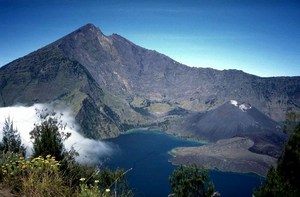 Lombok Island’s Mount Rinjani National Park may well join UNESCO’s World Heritage List next year because of the incredible symmetry the park provides between nature and local culture. To be included on the United Nations Educational, Scientific and Cultural Organization’s world heritage list the national park must meet at least one of 10 selection criteria and be of outstanding universal value, says UNESCO’s official website. The national park’s head M. Arief Tongkagie said Wednesday he had submitted a proposal to UNESCO because of the park’s outstanding natural panorama and the surrounding local residents’ commitment to preserving the area’s local culture.

The proposal included data collected over a four year period and would be sent to UNESCO’s World Heritage Commission via Indonesia’s central government. An approval of the proposal by UNESCO’s committee would see a massive boost to Lombok’s tourism industry and would ensure the ongoing preservation of the environment around the national park according to Panca Nugraha.

“The logic is that once it is declared part of the world heritage list, other nations in the world will feel a sense of ownership too,”” he said.

“It means if the park is damaged, we will all feel a sense of loss and other nations may help us care for the park,”” Arief said.

The national park takes up 40,330-hectares and is the most important tourist destination in the province. Administratively it belongs in part to West, Central and East Lombok regencies. Park management data shows the number of foreign and domestic tourists visiting the park reaches about 4,500 and 250,000, respectively, every year.

In the period between July and September the number of visitors tends to increase in line with holiday seasons in other countries. Foreign visitors come mostly from European countries, Australia, New Zealand and other parts of Asia.

The park’s Mount Rinjani sits 3,762 meters above sea level.
At Senaru village, which is located at one of the trekking gates to Mount Rinjani, traditional housing has been well-maintained, as has the park’s Wetu Telu Islamic community.

The Hindus also maintain their culture by commemorating the ngulam pekelem ceremony at Segara Anak Lake, located some 2,500 meters above sea level.

Thengulam pakelem ceremony sees thousands of local Hindus conduct their religious ritual at the lake. There are many other local cultures which are still intact amid the current modern era.

In anticipation of a growing tourism trade, park management has opened a new gate in Tembilo, East Lombok, in addition to the existing gates at Senaru, West Lombok, and Sembalun, East Lombok.

In cooperation with the Rinjani Track Management Board, park administration has tried to involve and empower local villagers as much as possible to help boost the development of tourism and the overall preservation of the national park.

Mount Rinjani was made a world legacy award winner in 2004 by Conservation International and National Geographic Traveler magazine.