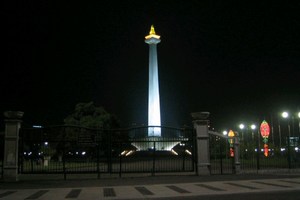 As most of you know that have visited Jakarta, Indonesia’s capital in West Java, getting around can be a hassle sometimes as most places you want to visit are far apart. Walking around [especially on a hot day] can be tiring. One of Jakarta’s most famous attractions is the Tugu Monas, or the National Monument Tower and symbolises the fight for Indonesia’s Independence. It is topped by a 14.5 tonnes flame-shaped bronze plated in 35 kg of gold. Inside the base of the monument is an exhibition on the country’s Declaration of Independence and several dioramas showing the history of Indonesia. It’s not only the monument that is interesting, it is the park area of some eighty hectares and fountains that are impressive. Walking around the complete area might take some people by surprise because of its area coverage. It’s a fair distance from the carpark to the monument!. 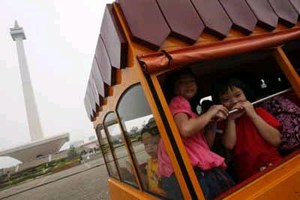 Good news though. There is now a shuttle bus that will take visitors around the area of the monument. There are two shuttles, each three-cars-long and able to carry 36 passengers with three crew members on each train: the driver, assistant, and tour guide. Topped with decorative Betawi-style roofs, the shuttle is four meters long, 1.7 wide and 2 high. The shuttle takes 10 minutes to reach the base of the monument from the southwest gate, some 800 meters away. The diesel-fueled train is orange in colour like the Transjakarta buses.

The minibuses run free of charge from 8:15 a.m. to 5 p.m. daily with visitors being guided from the main West entry gate to Monas (in front of Indosat) to the monument.

Monas is the largest public park in the city and measures 80 hectares.