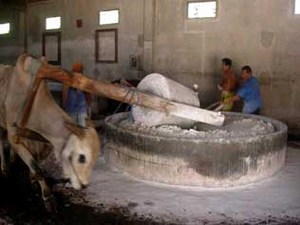 Traditional home-made noodles or mie lethek are still made the old fashioned way at Bendo hamlet, Trimurti village, in Srandakan district, Bantul regency. The uniqueness of this particular noodle is that it is produced with the help of “cow power“, rather than modern machinery. And truly traditional producers still avoid any use of preservatives. Bendo hamlet has been known as a famous noodle-producing village for years. Many traditional noodle producers, however, have not been able to compete with modern noodle producers, who rely on industrialized machinery.

Their traditional noodles are reddish in color and can appear a little dirty, which is why locals call them mie lethek, which translates literally to dirty noodles.

“The reddish color comes from manioc powder, the only additional substance for the production of the noodle,” Ferry said.

Because no machinery is used in production, the drying process is dependent on sunshine.

“In order to make good noodles, we have to mix and press the two ingredients perfectly,” said 60-year-old employee Harjo.
“That’s why we need the cows, because men are not strong enough.

“The stone grinder is very heavy.”

The next step is to mold the mixture into squares that are steamed for 1.5 hours each, before they are dried in the sun.

“During the dry season the noodles will dry within a day, but during the rainy season it will take two to three days,” said another worker, Kasiman.

Ferry said he could produce 900 kilograms of noodles from one ton of manioc per day.

Employing 22 workers, Ferry said he was unable to make a huge profit from his business. He said he was hesitant to raise noodle prices amid escalating prices of basic materials.

“Even though I cannot make a big profit, I still run this business well,” he said.

Ferry has employed most of his workers for years and provides all of them with meals throughout their working day.

His noodle business was established by his grandfather in the 1940s. It was continued by his father, Ismet Bachir Saleh, before being handed over to Ferry in 1982.

He said using modern machinery would be more simple and efficient, but he would not change his traditional techniques for modern ones because of the associated expense.

“Modern machines are too expensive for me.

“And my customers said that noodles produced the traditional way are more delicious than when produced with modern tools,” he said.

Another reason Ferry said he did not want to use modern technology was because he wanted to keep employing his 22 workers, many of whom would lose their jobs if he industrialized his business.

Ferry’s wife, Indri, is responsible for marketing the business and said noodle orders would usually reach a peak during Ramadhan.