Mentawai Villages to be Relocated: Sumatra 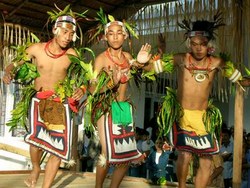 The Mentawai administration will relocate dozens of hamlets in five villages of Mentawai Island regency away from the shore due to the threat of tsunami, a local politician said. Mentawai Island Legislative Council Speaker Kortanius Sabeleake said residents had asked the administration to help them in relocating their houses and public places. The residents are concerned that their villages are vulnerable to tsunami, particularly after a strong quake hit the area in September.

“We are still waiting for the regent’s proposal on the funds for the relocation. The regency still has Rp 20 billion in natural disaster mitigation funds,” he said.

Currently, they are staying at refugee shelters a kilometer from the water line.

“They want to establish the shelter as their new village. We do understand their fear, but we have to manage the relocation well. I’m sure that the Mentawai administration needs time to make sure whether the new location fits with the spatial plan or not,” Kortanius added.

The administration has created a team to asses the needs of the refugees and draft a rehabilitation and relocation plan.

“The hamlets in those five villages should indeed be relocated, because they are so close to the seashore. This situation makes the residents live in constant fear of a tsunami,” team member Sandang Paruhum said.