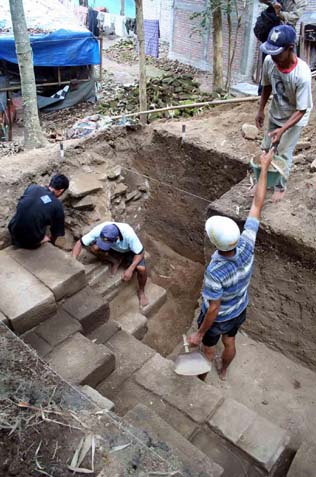 The 17th century Islamic kingdom of Mataram, under the leadership of Sultan Agung, used to be a major state known throughout the world. An inland kingdom located, Mataram still boasted a strong naval fleet.

Dutch national Jan Vos, who in 1924 visited Kerto Islamic Mataram — which still exists in Kerto, Pleret — wrote in his diary that Islamic Mataram, ruled by sultanic leadership, was a great and imposing kingdom.

In the diary — now kept in the Netherlands — Vos describes how he entered the royal compound through a vast, clean and neatly laid out park, believed to be an alun-alun, or the central town square. Vos then passed through the gate and only then was he able to meet Sultan Agung, who was sitting on the throne of the Charta (pronounced “kerta“) kingdom.

Vos noted that the Sultan possessed a large pond to be used by his navy for war exercises, and another pond that contained crocodiles as a show of power. Reportedly, a Dutch soldier was once caught and fed to the crocodiles as punishment.

Unfortunately, sources and literature on the grandeur of Islamic Mataram are very scarce. Meanwhile, archaeological sites and ruins of the kingdom are neglected, and some have been damaged as a result of local residents’ activities.

The excavation’s field coordinator, Rully Andriadi, said that the first stage of the excavation, from early May to June 5, was focused on a 0.5 hectare plot of land in Kerto hamlet. The area is thought to have been the siti inggil — forecourt — of the palace.

Various historical objects have been found among the 30 excavation boxes filled during the dig. The team also found a structure of andesite stones to the south that resembled steps, possibly part of the rear entrance to the building.

“Based on a provisional analysis, the building where we are excavating used to be the Sitihinggil of Kerto Islamic Mataram Palace under the rule of Sultan Agung,” Rully said.

Surface archaeological finds the team has discovered so far are two large umpak, or holes where columns once stood. Other finds from this site include broken Chinese ceramics as well as a number of beads and such small fragments of the past.

Archaeologist Sofwan Noerwidi of the Yogyakarta Archaeological Center added that his team had also found a mosque in the southwestern corner of the site, as well as a tomb.

The hamlets around the site also are named after the areas of the former palace: for example Petambak hamlet, named after a fishpond that may have once stood there; and Pungkuran hamlet, after a rear garden, perhaps where the sultan took his rest. There is also Segoroyoso, from segoro meaning “sea” and yoso for
“engineering”, and which is believed to the location where the Mataram navy held its exercises.

Rully said that from June 11 to July 14, his team was to proceed with the second stage of the excavation, which was to focus on the Islamic Mataram palace located in Pleret, Bantul, to where the seat of the Mataram kingdom was moved from Kerto.

“However, we have found a structure for which we have yet to establish a connection, so we decided to continue with the second excavation in Kerto,” he added.

According to Rully, this structure is believed to be the foundation of the forecourt.

In its spatial layout, the Islamic Mataram palace is the same as that of Yogyakarta Palace: in the northernmost part of the compound is the alun-alun, to its south the forecourt, from where one enters the palace proper; to the east of the compound stands a mosque.

“The spatial layout is precisely the same between Islamic Mataram and Yogyakarta (palaces),” said Rully.

During this second stage, Rully’s team discovered a tomb presumed to be that of the great Mataram ulema.

“The mosque was also discovered, but its original shape has been lost because it was renovated by local residents,” he said.

According to historical records, the seat of the Islamic Mataram kingdom was moved constantly. The kingdom was established in 1584 by Sutawijaya, who later bore the title of Prince Senopati, and he was succeeded by Prince Jolang.

In 1940, during the reign of the third Mataram king, Sultan Agung, the royal seat was moved to present-day Kerto hamlet in Pleret, Bantul. Agung’s successor, Amangkurat I, moved it to Pleret, then again to Kartosuro.

Finally, the royal seat was moved to Surakarto before the Islamic Mataram kingdom was split in two — Yogyakarta and Surakarta — following the signing of the Gianti treaty.

Among locals, the site of the Kerto kingdom is known as lemah dhuwur because the land (lemah) at the site sits higher (dhuwur) than the rest of the area. But the land is not a natural hill, and archaeologists think this location was deliberately covered and so became elevated. Ashes and remnants of burnt objects have been found to the southwest, indicating the plausibility of this theory.

The scarcity of surface data at the Islamic Mataram site is explained by the activities of the locals, who are yet to understand the significance of historical objects and ruins. Some local residents have used parts of ruins in constructing the steps of a wudlu (area for ablution) while others have dug up the site to make brick-making molds.

However, the blame cannot be laid entirely on local residents, and the government must continue to raise public awareness on the significance of historical objects and sites.

Rahayu, who lives near the Kerto Islamic Mataram site, said some residents were ignorant of the site’s existence.

“Locals even use the soil in the area for brick-making,” she said.
Part of the site, Rahayu added, was preserved well because residents felt it was haunted.

“They believe a kind of djinn lives there, and this location always used to be dark until several people honored it,” she said.