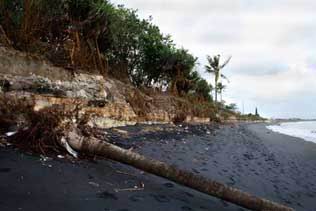 Mass tourism on the island of Bali over the last three decades has caused considerable environmental damage to its beaches and coastal areas, an environmentalist said.

“There are too many people living on the island and too many buildings are being erected along the shorelines,” Marthen Welly, an outreach officer from the Nature Conservancy, said.

Bali now has a population of around three million, with most people living on the coasts.

One of Bali’s most polluted beaches is Sanur. Once a pristine beach, it is currently suffering serious sea erosion and water pollution.

The office of the Coordinating Team on Environmental Pollution Management in Bali has reportedly inspected the waste management systems of a number of hotels in the area.

“The water in Sanur is murky. Water pollution in this area is due to a lack of good waste management systems,” Marthen said.

Mustika, a marketing official at Inna Sindhu Beach Hotel, said the hotel was waiting for the Denpasar Sewerage Development Project to be implemented, which was suppose to begin this year.

“We’re waiting for that project to begin so we do not waste our money,” he said.

Beach erosion in Sanur has occurred due to the loss of offshore coral reefs.

“In the past, coral reefs were used as building materials for hotels,” Welly said.

Although the practice has been banned, the loss of coral reefs, which act as a natural barrier against large waves, has left the coast unprotected and has resulted in beach erosion.

A defunct project on Serangan Island developed by Hutomo Mandala Putra — better known as Tommy Soeharto, the son of former president Soeharto — has also resulted in a change in wave patterns and has caused further erosion to Sanur Beach.

The Serangan Island project involved expanding the island to three times its original size, through dredging sand from the ocean floor.

Around 20 percent of Bali’s coastal areas have eroded. Two kilometers of the island’s coastal areas are reportedly damaged annually. According to data from the Public Works Ministry’s Agency for the Conservation and Restoration of River and Coastal Areas, the length of eroded beaches increased from 51 kilometers in 1987 to 90 kilometers in 2006.

Putu Sudana from the agency said the Bali administration had the difficult task (and dilemma) of preserving the environment while trying to boost the economy.

The agency has carried out conservation programs costing Rp 340 billion (around US$333 million) to halt beach erosion by building walls and embankments along some of the island’s coastal areas. The money has mostly come from Japanese loans and the state budget.

“The cost to build these water breakers is far greater than the amount needed to preserve the environment in the first place,” Welly said.

According to data from the Bali Tourism Board, the number of hotel rooms in Bali has reached 52,000, while daily direct arrivals of foreign tourists is now between 3,000 and 4,000.

Welly said property owners have attempted to protect their properties by building water breakers independently. However, he said this is not a solution to the problem. “The water can flow to the building adjacent and cause problems there.

He said the majority of tourist divers had moved from the main island to Nusa Penida and Nusa Lembongan, islands south of Bali, to see coral reefs there because conditions in Sanur’s waters were poor. “The beauty is lost.”

“Eco-tourism is being promoted in Nusa Penida and Nusa Lembongan, which is a good thing,” he said. “The tourism sector there needs to be developed with care, to ensure it does not face the same fate as Bali.

“Sanur Beach is just one example of the many destroyed areas on Bali. Comprehensive and concerted efforts must be made to revitalize and protect Bali’s beaches.”