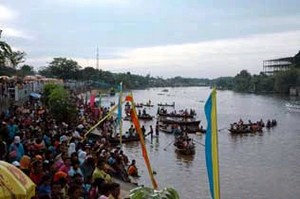 In Indonesia, Muslims celebrate Ramadhan in various ways. In Riau, they take part in the mandi balimau, or lime purification ritual. Usually occurring the last day before Ramadhan, the tradition of greeting the fast by cleaning oneself with limes in the river has been handed down from the royal Islamic kingdoms. But while it was traditionally a celebration of restraint, outings to local rivers to celebrate the last day before fasting begins is so popular today that mandi balimau has become a mass picnic attracting tourists.

Traditional activities on the auspicious day include feasting on buffalo meat rendang and other delicacies exchanged among neighbors and served at home.

Dressed in finery, children deliver food dishes and preparations of citrus fruit and flowers to both sides of the family.

In the afternoon, men go the river to cleanse themselves physically and spiritually, using the lime preparations. The women bathe at home, or elsewhere on the river, separated from the men.

The mandi balimau herb and citrus preparations are believed to be the cleaning agents people used before soap was common.

Purifying oneself physically and spiritually, so as to be able to fast sincerely and with the hope of being pardoned for past wrongdoings, is the essence of the ritual bath.

Cleansing oneself may involve special visits made to acquaintances to ask forgiveness for offenses.

In the coastal areas of Riau, the ritual is known as petang magang, which implies restraint from any activity that may taint the fast. It is an appropriate time to settle family feuds and grudges.

However, the noble values of the bath seem to have been forgotten and it is feared the event may eventually become an ordinary trip to the river.

Rivers in the province were jam-packed this year with holiday revelers; no dividers separating men from women were seen.
If not spiritual, the mood was spirited, with music festivals, tug-of-war games and motorbike races to enjoy.

At the riverbank event under Siak I bridge, Rusli said mandi balimau had “enlivened the Ramadhan atmosphere in Pekanbaru” and had the potential to “foster bonds of friendship” and “promote Riau’s tourism program.”

He reminded listeners the mandi balimau message was to cleanse oneself in order to perform the fast with devotion.

The communal bath already appears on the religious tourist attraction calendars of a number of local administrations in Riau.
But criticism is widespread.

“The mandi balimau ritual has diverged far from its true meaning.
“It is nothing more than an extravagance,” said Kampar district elder Syamsuar Nur Datuk Mangkuto.

According to Syamsuar, mandi balimau has become no different from a secular mandi bersama, in which men and women bathe together.

“This has considerably deviated from Islamic teachings and the Malay tradition.

“It’s about time the government step in to restore its true meaning,” he said.

A similar response came from the head of the Riau chapter of the Indonesian Ulama Council, Mahdini MA, who said that Ramadhan was a time when sins are pardoned and blessings for good deeds are multiplied.

It might be greeted with merriment, he allowed, “provided that it is not greeted in an extravagant manner.” Mahdini MA said, “Don’t greet Ramadhan by doing things that can lead to immoral acts.”

In Islam it is common for ritual bathing to precede acts of devotion, he said.