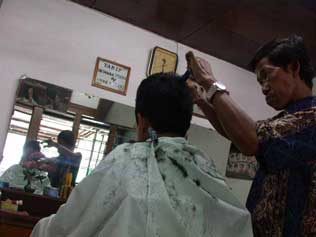 Advianto Prasetyabudi was beaming with satisfaction as he rose from the chair after only 10 minutes — but looking sharper with his neatly trimmed hair. The 29-year-old Semarang resident, more commonly called Avi, had just finished at Cak Mamat’s small shop, a 2-by-3-meter kiosk bearing the sign “Madurese Barbershop“.

“I prefer Madurese barbershops to hair salons in getting my hair cut, because it’s more relaxed and intimate at such kiosks, where we can chat about anything in a less formal atmosphere,” said Avi. “Cak Mamat and I have finally become good friends.”

Madurese barbershops are now mushrooming in several cities and towns across Indonesia. The perseverance of the people from Madura, an island located just off the coast of East Java, has again been proven in this business.

While the Madurese have long been known for their success as chicken satay vendors and later, as scrap dealers, since the 1990s many have turned to barbering.

About 700 Madurese barbers can be found in the northern coastal areas of Central Java covering Kendal, Semarang, Demak, Jepara and Ambarawa. The barbers maintain a close community, often holding family parties for circumcisions and weddings.

Madurese barbershops have also spread through Jakarta, Yogyakarta, Central Java and even several cities in Kalimantan.

The main difference between hair salons and Madurese barbershops is that at the latter, barbers trim the hair directly without washing and pinning it, and use electric trimmers. Using this dry-cutting technique also means that services are a lot faster.

And unlike salons, which generally employ female hairstylists, all Madurese barbershops are staffed by men.

“The other feature of a Madurese barbershop is a free massage of the nape, shoulders and arms. Though it’s only for about a minute, this service is very special to me. It relieves the fatigue of having to sit straight for 10 minutes,” Avi said.

Chonamin, or Amin, a 55-year-old who runs his own barbershop on Semarang’s Jl. Teuku Umar, said: “The post-haircut massage is an extra service that was first offered in the 1980s. I initiated the back rub then, when I worked at Johar Barbershop in Johar Market.”

The massage service is not provided by all shops, though.

“In Boyolali there’s no such extra service. If the kiosks in Semarang do offer a free massage, I’m very eager to go there one day for the difference,” said Agus Wahyono from Winongbaru, Boyolali.

Amin started working as a barber as a teenager in 1969. He left Madura’s Bangkalan district to earn a living for himself, at a time when only a few were interested in the business.

“I choose to have my hair cut at Madura kiosks because it’s fast and cheap,” said Slamet Yono, a Cepogo resident who works as a civil servant for the health office in Boyolali.

When barbering began to provide an adequate source of living, an increasing number of youths, generally from West Bangkalan, started joining the business.

“I personally don’t know why only people from our area become barbers. The Madurese from Bliga, East Bangkalan, are satay sellers. So the two parts of Bangkalan have their own characteristics,” said Amin, whose customers mostly read the Jawa Pos daily while awaiting their turns.

The East Java paper is found in most Madurese barbershops to strengthen the bonds among fellow citizens.

Amin’s customers can choose hairstyles sported by their favorite icons, like David Beckham, James Bond and Superman, or choose to go bald — all at the same cost of Rp 7,000, including the massage.

Haircutting skills are not formally taught at the barbershops, in contrast to most salons, which train their hairstylists. New barbers usually learn from their neighbors or siblings and practice their skills on local village children.

“They begin to handle adults when they are convinced of their abilities. So we all become skillful through a lot of practice, learning while working,” said Amin.

Asked if West Bangkalan people had any interest in selling satay, the father of three replied: “None are, apparently. We may share a common gift for this job, even a common fate. It makes me wonder why many Javanese youths are out of work, when trimming hair provides income.”

Though some satay stall owners have become wealthy businessmen, Amin — with his modest barber kiosk he rents for Rp 3.5 million a year — still earns enough to pay for his children’s education. Two of them have graduated from vocational high school and another has obtained a diploma from Semarang’s Diponegoro University.

Rozy, a young barber who has opened shop on Jl. Semeru, has his own reasons for joining the business: “It’s too tough for me to sell satay. I would have to get up early to buy chickens, slaughter them, cut up their meat and skewer the pieces before I could start selling.

“I’d rather cut and trim hair, which is practical and not so exhausting.”

“Once I had 30 customers (in a day), which made me very tired. People were waiting before my shop opened. Weekends are usually peak days,” Amin said.

A Madurese barbershop is normally equipped with three to five pairs of scissors, an electric shaver, a razor, combs, a hairbrush, chairs, a dressing table with a mirror, and an electric fan.

“The equipment are usually furnished by elder siblings or bought by the barbers themselves if they can afford it,” said Amin.