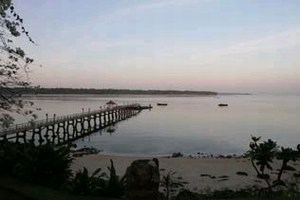 A perfectly round sun in glaring hues of red and orange was sinking behind the horizon between the islands of Gili Air and Gili Meno in Lombok, West Nusa Tenggara. Cruising on a boat that was moving into the sunset, I sat dreamily, watching the sky turn from grayish-blue to purplish-pink. The sun was reflected in the rippling water, giving it a golden glimmer according to Prodita Sabarini. I’ve always dreamed of watching the perfect sunset by the beach — like the one so eloquently depicted in Seno Gumira Ajidarma’s collection of short stories Sepotong Senja Untuk Pacarku (A piece of dusk for my love).

Desperate after several attempts at catching the perfect sunset, I was about to give up, almost ready to concede that Seno sunsets were merely fiction.

However, my trip to the island of Lombok saved me from a broken dream.

When I took up an offer to join a sunset cruise organized by five-star Oberoi’s Lombok Beach Club, I got my chance to experience that perfect sunset. The Beach Club is managed by marine adventure company H20 Sportz.

The lulling movement of the boat, cool breeze on my skin and Lombok’s natural beauty made it breathtaking.

Medana beach and the volcanic soil of handsome Mt. Rinjani were visible to the east.

To the west, the silhouette of Mt. Agung on Lombok’s sister island, Bali, was visible.

For vacationers willing to trade the excitement of a tourist crowd for nature and tranquility, Lombok is the place.

The island is slightly smaller than neighboring Bali, with a population of 2.3 million, the majority of whom are Muslim.

The indigenous Sasak people adhere to a unique blend of Hindu and Muslim beliefs found only in Lombok.

The island has a wide variety of topographical features and microclimates. North Lombok is the domain of the active Mount Rinjani while the central region is devoted to agricultural. South Lombok, while very arid, offers breathtaking vistas of a fierce sea from atop towering rock outcrops. Check out the Rinjani Trekking Club.

The coral reefs off the three Gili Islands are still in good condition, making this a good place for snorkeling and diving.

I stayed at The Oberoi, located in Tanjung, around 35 minutes northwest of Selaparang Airport. From the Medana Beach, where the resort is located, Gili Air and Gili Meno are visible.

I arose early for sunrise watching and fishing, activities organized by the Beach Club.

The new day broke as magnificently as the previous day had ended. Around 6 a.m., from the jetty at Medana Beach, we could see the first morning light give a pinkish hue to the calm waters.
We were taken to Gili islands just off Lombok and enjoyed sunrise photography on the way. We were also lucky enough to catch up with a group of dolphins and land a yellowfin tuna.

At Gili Air — one of the three Gili islands and the nearest to Lombok — some went sailing and some snorkeled. There, in the underwater forest of coral, I spotted white sea turtles.

We anchored off a white-sand beach and, as the day got warmer, I retreated to a shady hammock with a good book.

Gili Air is popular for its coral reefs and tranquil ambience. It’s quieter and more relaxed than Gili Trawangan, which is popular as a party island for backpackers.

We took a ride on a cidomo, a local horse carriage. Thirty minutes was all it took to circle the entire island. After the ride, we were treated to the local spicy Taliwang chicken for lunch.

Unlike Bali, Lombok has only a few five-star hotels. The Oberoi was Lombok’s first luxury resort; the island also has a Sheraton and a Holiday Inn. Budget lodging is available, including at popular Senggigi beach and in the Gilis.

Despite natural beauty and interesting culture, tourism in Lombok lags behind Bali. Lombok suffered from rioting in 2000 as well as the bomb attacks in Bali in 2002 and 2005.

An international airport is under construction, scheduled for completion in 2009. It is expected to bring more international airlines to the island, and more people to witness the beauty of Lombok.

Currently Lombok can be reached from Singapore with Silk Air and from Jakarta with Garuda Airlines.

There is also a Bali-Lombok sea alternative: public ferries departing every two hours from Padang Bai in Bali. Tour companies such as Perama tours also go to Lombok.

High-end resorts such as The Oberoi, The Sheraton and Holiday Inn are available. Budget places are available in Senggigi beach and the three Gilis.

Lombok has an extensive network of roads, but public buses and bemos (minibuses) are generally restricted to main routes. You can also charter a bemo or cidomo (pony cart) or rent a small motorcycle or a car. Outrigger boats called perahu are used for short trips to snorkeling spots or surf breaks.