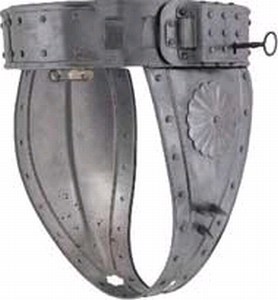 News from the popular resort area surrounding Malang in nearby East Java, is just too bizarre not to share. Detik.com reports that the municipal government in the East Java resort area of Batu are preparing to “clamp down” on suspected prostitution practices taking place at many of the area’s panti pijat or traditional massage parlors. Iman Suryono, a municipal police official (pamong praja) in Batu, is dedicated to eliminating the “plus-plus” and “happy ending” element from the local spa business. To achieve this “end,” local authorities are considering making “chastity belts” part of the required uniform for masseuses in the cool hill-side resort close best known for its local inns and delicious apple crop.

Officials in Batu are said to be busily reviewing research done by an Indonesian technician from the West Java textile center of Bandung, Simon Y Sanjaya, who developed a “loyalty corset” designed to foil both rape and prevent spousal infidelity. Sanjaya’s design is being viewed favorably by Batu officials who feel that a stainless steel version of the “knicker nixers“, may be unsuitable for Indonesia’s tropical climate.

Chastity belts have a long, if somewhat undistinguished, history enjoying their peak popularity in the Middle Ages when they were used to keep a maiden’s virginity intact or, at least, to enforce sexual abstinence by one’s mate while you were off crusading in the Middle East.

Officials in Batu admit that the idea of mandatory chastity belts is still only at the discussion stage, awaiting local policy-makers as they ponder issues of enforcement, penalties for non-compliance and whether they will opt for an ultra-modern Kelvar model or the more cumbersome traditional plate-metal version. Also under discussion are more mundane issues, such as procedures for the safekeeping of keys to allow the wearers to quickly remove the device for periodic “calls of nature.”

While Batu officials decide how best to preserve the chastity of local masseuses, two local massage parlors in Batu are said to have already introduced the new measures, requiring their female staff to don the undergarment that serve as a “barriers to illicit practice.”

The Batu officials who will decide the matter, believed to be comprised entirely of men, have apparently dismissed out of hand alternative suggestions that male customers be required to wear the male version of a chastity belt before undergoing a traditional massage treatment.

Given the area’s reputation for its delicious apple crop, it may be only a matter of time before Old Testament scholars introduce regulations to outlaw Batu women from selling the local apple crop to any male customers. After all, we all know the trouble that precipitated for Adam and Eve.

And finally, before the suggestion of morally-sound undergarments dreamed up by Batu’s officials is too quickly dismissed as absurd, please note press reports that Jakarta officials are praising the Batu proposal, insisting they, too, wish to explore the viability of introducing similar measures in massage parlors in Indonesia’s capital city of Jakarta.