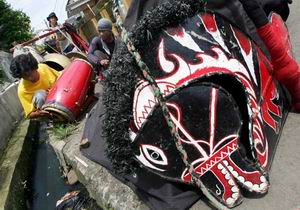 Quite a while before I married my now wife, Candika, I can recall seeing a Kuda Lumping show in Yogyakarta. Actually, it took me quite by surprise as I walked along Jalan Malioboro from her family house.

It was around 11pm and the streets were very busy for a weeknight when I noticed a rather large crowd had gathered. I sat on the pavement with the locals, respectfully taking fotos, and watched the hypnotic movements of the players in the troupe.

Naturally, I put a few thousand into the rusty old tin being carried around by an old woman who was obviously the matriarch of the group!.

Kuda Lumping has many props and one of them being a flat hobby horse generally made of painted bamboo. The whole folk-play trance is a sight to be seen and well worth it if you get a chance on your travels in Java. R. Berto Wedhatama wrote a small article about it:

Sideshow antics rarely fail to amuse. The Sari Budaya family troupe from East Java astonishes audiences daily with a wide variety of tricks and illusions — some of which defy explanation — including kuda lumping (horse made of plait-work with which men dance themselves into a trance) and fire-eating.

Among other wonders the group works are eating glass and having knives thrown at them — without so much as spilling so a drop of blood.

Noted for their sheer bizarreness, kuda lumping shows often feature a bound child being whipped by a man. Yet, when the ropes are untied, the child demonstrates she is completely unharmed. 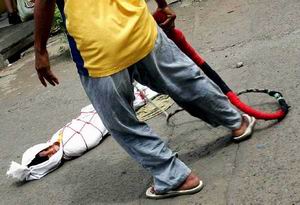 The members of the Sari Budaya troupe, including 6-year-old Titi, know how to attract a crowd with their pain-free acts, which have an air of American sideshow steeped in Javanese mysticism about them.

But Titi and her fellow performers struggle to stay true to their profession as commercial venues have lost interest in human oddities.

There is no charge for watching the show, except the coins voluntarily deposited in the container they pass around when it’s all over.