Komodo Dragon on the Verge of Extinction: East Nusa Tenggara 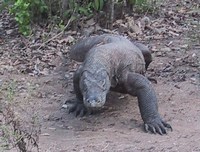 If you travel to East Nusa Tenggara then a visit to Komodo island is a must even if only to experience the other fauna and flora in the Komodo National Park. The residents of Komodo island are naturally the Komodo Dragon, the largest of all known lizards, and of course the park rangers live there too. These magnificent creatures (the dragons, not the rangers!) are also found in the nearby island of Rinca. The island of Komodo was declared a world heritage site in 1986 by UNESCO and at that time, the estimated komodo population was around 3,000. Normally, Komodo Dragons hunt large game like deer and boars and are very fast-moving and are not, as believe has it, devourers of humans. But, there is always a first time. And now, this great living treasure of Indonesia, is on the verge of extinction due to forest fires and illegal poaching.