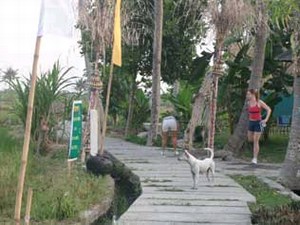 A new recreational site – Kertalangu Cultural Village – is being developed in Kesiman Kertalangu, Padang Galak, East Denpasar, by hundreds of local farmers under the coordination of the village head. Strategically located on Jl. Raya Bypass Ngurah Rai, about five kilometers from downtown Denpasar, the Balinese, especially those in Denpasar and Gianyar, can easily reach the location by car, motorcycle or bicycle.

On the side of the thoroughfare will be a shop selling ornamental plants and earthenware and not far from the shop an open-air restaurant with a stage and a sound system.

Visitors who walk through the compound will be amazed when they come across dozens of hectares of rice fields. There is a two-meter-wide jogging track meandering through the fields.

Visitors are able to buy vegetables harvested by local farmers like water spinach and legumes along the four-kilometer track.

The two have been assisted by Kesiman Kertalangu village head Wayan Warka, whose role is to secure the support and commitment of 200-odd farmers.

Tourism has been driving business development here, while other supporting business activities include the production of ceramics, earthenware, candles, incense and glass ornaments. At the end of the jogging track, visitors will also be able to observe the production process of the above-mentioned goods. A number of fishing ponds are also ready for use.

In addition to the fishing ponds, Dewa Gede said there would also be outbound activities. Another 50 huts with coarse grass roofs will be built, he said.

Houses in the neighborhood are also being made to look more Balinese and many people are putting in extra bathrooms and bedrooms to accommodate overnight guests.

Dewa Gede said visitors would be able to see how local farmers lived.will be paddy storage and traditional rice processing equipment to create a traditional village atmosphere. Rice will be cooked over a wood fire,” he said.

As the facilities are still under construction, Dewa Gede said the location had not been officially opened yet. But every day visitors already come on foot to have lunch.

He said a number of companies had also held functions there.
The management prefers to employ local people as craftspeople, guides and restaurant staff. “We will train them to be professionals like other tourism workers,” Amran said.

He said the Kertalangu Cultural Village had been established as a means of preserving the dozens of hectares of paddy fields in the center of the city.

“Much of our region has been converted from paddy fields into residential or commercial areas,” Wayan Warka said.

Moreover, Dewa Gede said local farmers had been entrusting rice cultivation to farmhands from outside the region because their children had chosen other professions. This meant they were not as committed to farming as they had been in the past.

Aside from that land prices continue to escalate at a time when potential buyers are on the rise, Dewa Gede said.we do not do anything to reverse this trend, the paddy fields will disappear.”

Besides protecting the local farming culture, the development of the recreation site is also intended to help improve the welfare of local farmers.

The farmers will still be able to continue their farming activities and at the same time get additional income from visitors. Under an agreement with local farmers, 5 percent of profits for the operation of the village will be managed by the farmers through a cooperative named Sarin Bumi. The term of the agreement between the management and the farmers is 30 years.

Agricultural activities will be focused on the use of environmentally friendly technology, Amran said, with an emphasis on organic farming. “A number of parties – both in the government and the private sector – have expressed their readiness to help. An Australian businessman is also interested in our organic produce,” he said.