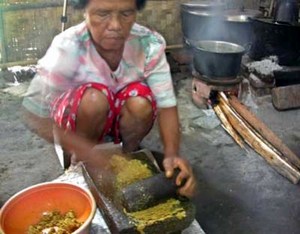 Kampong Jamu, or the village of medicinal herbs, is the name people refer to when they are talking about the village of Kiringan, in Bantul, Yogyakarta. For the past century or so, Kiringan residents have been making a living from the manufacture and sale of jamu gendong — medicinal herbs that are carried in a basket on a woman’s shoulder using a sling and sold from door to door. Today, 102 of the 200 households in the village depend on the medicinal herb industry for their livelihoods. What makes Kiringan medicinal herbs characteristically different is the fact they are produced using a traditional method. The ingredients used to make the herbal remedies include extracts of Javanese plants with health-improving properties.

Kiringan residents process the medicinal herbs in the same way their ancestors did; the ingredients are pounded to form a powder and are then ground further by hand using stones according to Slamet Susanto.

Kiringan medicinal herbs are even sold following traditional practices; every day, as many as 100 housewives from Kiringan village set out on their bicycles or on foot to find customers to buy their medicinal herbs.

“They sell by going around the villages. They walk or ride bicycles, while those who have customers far away use motorbikes,” said Umi Muslimah, 36, the head of Seruni Putih, the Kiringan medicinal herb collective.

All 102 households that make medicinal herbs, said Umi, do so without using preservatives, so the mixtures have a shelf life of only 12 hours or so. To produce fresh mixes, the residents must work every day to manufacture their products for sale.

“After 12 hours, the medicinal herbs are no longer fit for consumption, so they should be sold quickly after manufacture. But, praise God, my daily output is always sold,” said Suwarni, 57, one of the makers and sellers of medicinal herbs.

Kiringan residents who manufacture medicinal herbs are easily recognizable — their palms are stained yellow. The discoloration is caused by one of the traditional ingredients they pound and grind daily; turmeric.

Suwarni said the production of medicinal herbs in Kiringan was broadly divided into three types. The first type is jamu kunir asem, which is a herb mix of white turmeric, wild ginger and tamarind.

The second, jamu galian, has a mixture of 15 ingredients from traditional medicinal plants, including the large kayu legi forest tree, ginger, lemon and others.

“Another herb that we use is jamu paitan (a bitter medicinal herb), so called because it tastes bitter,” said Suwarni.

To prepare the traditional, fresh medicinal herbs, Suwarni and her husband Ngadiyo Suwarni start work at 3 a.m., pounding herbs and making the ingredients.

“I start selling at 7 a.m., so I have to start preparing at 3 a.m. to make sure the herbs are ready,” Suwarni said.

The powdered ingredients are mixed with boiling water. This water comes from three sources; the first is the water from boiling particular herbs, the second is from the water used to boil tamarind and the third is water made from boiling papaya leaves.

“The container used to measure a handful of ingredients is half a coconut shell.”

The standard price of the medicinal herbs is Rp 1,000 (10 US cents) per handful.

To avoid unfair competition, the Seruni Putih cooperative has fixed the selling price of medicinal herbs at Rp 1,000 per handful. But in the market place, the price can be adjusted.

“Sometimes we have customers who ask for a stronger mixture, a double dose, so of course the price is different,” said Umi.

Most of the medicinal herb sellers of Kiringan are women, who are respected with the title Mbok (a form of address for older Javanese women of humble origins). They follow their own etiquette in the sale of medicinal herbs and have exclusive rights to sell medicinal herbs in their designated regions, where other vendors are prohibited.

“If there are new vendors, they have to look for areas which haven’t been allocated to sellers from Kiringan,” said Umi, who rides a bicycle 10 kilometers daily to sell her herbs.

Saginem, a customer of the Kiringan medicinal herb sellers, said he consumed the herbal remedies twice a week.

“My body feels better, it doesn’t feel weak even after I’ve been working hard,” he said. “If I feel that I’m being attacked by a stomach infection, or a cold or headache, I just drink medicinal herbs and everything feels better.

“Who doesn’t feel healthier after drinking medicinal herbs like these? They are far different from the medicinal herbs sold in the cities because the ingredients are fresh.”

Others use medicinal herbs to help them feel young and rejuvenated. For example, 57-year-old Suwarni is already a grandmother but still appears healthy; the skin on her face isn’t wrinkled, she still has her own teeth and she rides a bicycle more than 15 km every day to sell her medicinal herbs.

“Because I make the medicinal herbs myself, I can drink as much as I want,” said Suwarni.

Another resident, Salami, 73, still appears healthy because, she says, she routinely consumes medicinal herbs she makes herself. Everyday, Salami walks her rounds selling her herbal mixes.

Umi said consuming Kiringan medicinal herbs made her healthy because all the ingredients were natural. One of the ingredients used in the medicines, curcuma domestica for example, is said to have restorative powers, can relieve swollen gums, chest and stomach pains, menstrual problems and improve blood flow.

Curcuma xanthorhiza, another local herb, is said to be able to reduce fever and constipation, accelerate blood flow, stimulate urine output and relieve asthma and stomachaches. The boiled water of tamarind contains tartaric acid, carbohydrates, proteins and fats that herb makers say cool the body and accelerate the production of waste.

“I have a customer who moved to Jakarta. She calls me longing for Kiringan medicinal herbs because the herbs sold in Jakarta do not taste good,” said Umi.

Making and selling medicinal herbs has become a tradition handed down from generation to generation among Kiringan residents.

“It has been this way ever since I was young … the local people have always made medicines from herbs,” said Salami.

Women originating from outside Kiringan who are married to men from the village also follow the tradition and start selling herbal medicines, she added.

“I’m not from here but I married a local so I also started following the tradition of selling medicines,” said Salamah, who has been a saleswoman for 17 years.

To maintain the integrity of their market, the medicinal herb makers of this home industry have agreed not to use preservatives.

“Gadjah Mada University (in Yogyakarta) has even offered to produce our medicines in powder form. We rejected the proposal because we don’t want to use preservatives just to give our medicines a longer shelf life,” said Umi.