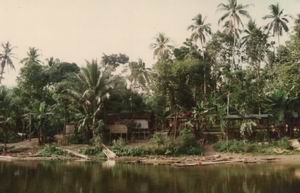 Kalimantan, in area, takes up about three-quarters of the southern part of the island once known as Borneo. Despite exploration and development there are huge areas of the island untouched making it a fabulous place for explorers and adventurers as well as travellers alike.

The indigenous peoples of Kalimantan are the Dayaks, the Malays who mainly reside in West Kalimantan along coastal lines, and the Banjarese-Malay who are to be found in South Kalimantan. Due to the transmigrasi policies, there are also many migrants from other parts of the region such as Buginese, Javanese, Madurese, and Chinese who are mainly found in West Kalimantan.

Subsequently and arising from the policy of transmigrasi there were many wars between the idigenous Dayaks and the Madurese. The Dayak fighters are known for their ferocious tactics, such as the beheading and mutilation of their victims.

After the wars, the Dayaks shifted from their ancestral homeland and into the country, and, mainly near rivers. One of the groups is called “Senganan“, and they live along the Kapuas river in Sanggau, West Kalimantan. Recently, however, there is an increasing pride among Muslims of Dayak descendants to consider themselves Dayak again.

There are numerous Dayak tribes and some in the interior which are so remote they have lived without western influence or interference for centuries. The Dayaks each have their own unique handicrafts – women do the weaving and beadwork and associated crafts whilst men are the woodcarvers.

Kalimantan’s dense rainforest supports a huge number of plant and animal species. Two hundred and twenty one different types of mammals and 450 species of bird are found in Kalimantan, with nearly 50 of those species found only on the island.

Tourism has yet to take-off in the measure that it has on other islands and there are many factors. It’s remoteness, the obvious lack of facilities for tourists and other infrastructure in general. However, for those of an adventurous spirit, this island is ideal with its rugged interior and wild rivers.