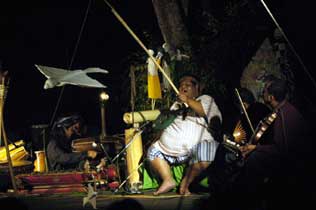 Gambus is the Indonesian word for a stringed instrument that belongs to the lute family, has six strings and is shaped like half a pear, but it can also be used to denote a style of music that is strongly influenced by Arabic culture. The lyrics of gambus music, which is often played at Muslim celebrations, are also usually in Arabic.

But after six months of experimentation, 43-year-old Slamet Gundono has come up with a new style of gambus music called Javanese gambus, which is dominated by the sounds of gamelan instruments the saron, boning and demung.

“We have spent six months exploring gambus music and invented a new style that is freed from the constraints of Arabic forms,” said Slamet at a concert held early September at Bentara Budaya Yogyakarta to mark the 25th anniversary of Bentara Budaya and introduce people to the new style of music.

“Take Javanese gambus, for example. The gambus rhythm is still there but the music also has a strong Javanese feel,” he said.

In the concert, a folk story about the Buddhist King Ulinnara, who became a Sufi master, was translated into dance and set to Javanese gambus played by a group of 15 musicians.

A compact disc of six Javanese gambus songs was also launched at the event. Slamet wrote the lyrics himself. They are based on a desire for universal oneness and the unity of all people. For example, the song titled Maca (Reading) was inspired by the Al-Alaq in the Holy Koran.

Slamet believes the teachings of the Prophet were directed at all human beings not only Muslims. It was only by chance that the Prophet came from Arabia, which is associated with Islam, he said.

Slamet said the gambus musicians wove together both composed and improvised elements in the performance.

“One performance is always different from the next. It cannot be repeated. All our performances are based on improvisation,” he said.

Max Byon, the group’s violinist, describes every performance as a “new challenge”.

At first it was difficult to play without any rules. The same song might be played in C one day and D the next.

“But we reevaluated our old habits and practices and found a new approach. I have always liked a challenge,” he said.