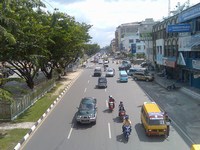 The city of Jambi is the capital of the Jambi province. Being located on the Batanghari River it is a thriving port and a connecting one for ships and other trading vessels usually carrying timber. Jambi is one of those places in Sumatra where you can see a floating population precariously perched over the Batanghari River. As a city it doesn’t have that much to offer tourists or travellers but rather the surrounding areas that are the biggest attractions. Using the city as a platform to reach these places is ideal. Accommodation varies from cheap to the upper cheap and there are some decent hotels. I particularly like the city for its ethnic mix of peoples. As I mentioned earlier it is the attractions outside the city that are the drawcard. Places like four national parks such as Kerinci Seblat National Park, Berbak National Park, Bukit Dua Belas National Park, and Bukit Tiga Puluh National Park. Each of these parks have their own unique biological diversity and are excellent for trekkers.

Located in the Bukit Barisan Mountains, Kerinci Seblat National Park has a total area of 1,484,650 hectares. Ecologically, Kerinci Seblat National Park is a conservation area with a diverse ecosystem. Topgraphically it has low rainforest area right up to sub-alpine areas. There are areas of high wetland peat lakes, freshwater swamp and even a volcanic lake. The amazing forests are probably the most pristine on the island of Sumatra.

Gunung Kerinci is the highest mountain on the island of Sumatra and very popular with climbers. The nearest village and climber’s base is Kersik Tuo, near Kayu Aro, Kerinci. The route is marked by signs, posted at half kilometre intervals. It is the highest volcano on Sumatra and care must be taken when ascending it and therefore using a local guide is recommended. The best season to visit is January to October.

Lake Kerinci is located 20 km from Sungai Penuh and there are several hundred villages scattered around the area. This is the premiere tourist attraction in the area and local tourists flock here on the weekends. The lake is famous for the Lake Kerinci Cultural Festival. Lasting for more than a week, the festical highlightrs include art performances, traditional sport competitions and exhibitions of local handicraft products. You can stay at the lake as there is accommodation available albeit smaller hotels.

Bukit Duabelas Nature Reserve is located in the Pauh subdistrict, 60 km from Bangko in the Sarolangun Bangko regency. Covering roughly 28,703 hectares, it is here you will find deer, monkeys, bears, wild pigs, elephants, snakes, iguanas and many species of birds. There are small lakes in its surroundings and many of the smaller streams flow into the Batanghari River. This nature reserve is also home to 1,000 people of the Kubu (Anak Dalam) tribe.

Muara Jambi Temple is 30 km northeast of Jambi, along the Batanghari River. This site is considered one of the richest archaeological sites on the island of Sumatra. The eight temple-like structures appear to Buddhist, and were probably built around the 14th century. In 1982, a 32 centimeter tall female bronze statue was found at Koto Kandis, in the Muara Sabak subdistrict. It is believed to be the goddess Laksmi, holding a lotus bud in her right hand and an oil lamp in her left. In addition to the archaeological sites, many visitors find the riverside an ideal recreation and picnic area.