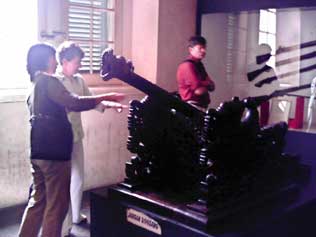 The good news is more and more people today visit museums in Jakarta. But unfortunately museum curators and visitors alike are not always privy to the information or surroundings they need to truly appreciate all there is to learn from the country’s cultural heritage.

Museum caretakers, according to MR Manik, head of the Jakarta History Museum, are responsible for the continued flow of visitors into museums, to help others learn and grow from their experiences.

“But most museum caretakers here don’t have a clue about what the visitors want,” Manik said.

“People now are more accustomed to the attractive displays inside shopping malls.

“We can not simply blame the public’s lack of appreciation — it is correlated with their education and economy levels.

“They are often more concerned with other important bread-and-butter issues.”

Manik said most museum caretakers did not know how to look after visitors wanting to see attractive displays, to speak with an hospitable guide or to find clean restrooms.

“We also need to think of creating collectible entrance tickets visitors would love to keep as souvenir.”

Manik, a civil servant at the City Culture and Museum Agency for 33 years, was recently assigned to head the Fatahillah Museum.

At first, he said he was not able to grasp the history of Jakarta by observing the collections on display — even after several viewings.

“The exhibition was not displayed in order, or thematically,” he said last week.

So Manik said he insisted on a range of changes, which at first met objections from his staff.

“They told me the exhibition was fine as it was and they said it did not need to be changed.”

Fatahillah Museum is the city’s largest and receives the most visitors, but Manik is determined it can be better.

“Appreciation of the museum has been improving in the last five years .. but it is not enough,” he said.

Indra Riawan, head of the Fine Arts and Ceramics Museum near the Fatahillah Museum said it was a sad fact so many Indonesians living abroad would experience museums overseas, but would not think to visit one in Jakarta or their home town.

Indra said many civil servants did not know which museums were run by the city administration — let alone a museum’s address.
“We need to sort out this internal matter first,” she said.

“That’s why I always suggest having meetings at different venues, moving from one museum to another.

“In that way, at least, officials become aware of the museums run by their office.”

The Jakarta History Museum, the Wayang Museum, the Fine Arts and Ceramics Museum, as well as the Maritime Museum are located around the city’s Old Town area — or Kota — in West Jakarta.

Ade Purnama, who established a program that encourages the community to visit heritage sites, Sahabat Museum (museum friends) in 2002, said the public’s apathy toward museums was understandable.

He said people’s attitudes were more than likely grown from childhood and negative experiences during compulsory school visits to museums.

“I never like how we as students were forced to learn history with that kind of program.

“Although I like history, but back in the school days, my mark in history was not good,” he said.

“The museum-visit program was boring.

“It still is … no one enjoys that kind of study excursion.”
But the majority of visitors to Jakarta’s museums are in fact still students.

Ade said museum caretakers also had to start promoting the history of the museum’s building, as well as the history of social-political life surrounding its location.

“We dig into the history of places along each of our Sahabat Museum excursions,” Ade said.

“To keep it attractive, I try not to repeat the same route or the same way of storytelling in each trip,” he said.

In the last five years, the community has held 50 visits around various historical sites in Jakarta, as well as around the archipelago. Ade said he has seen a significant increase to participant numbers for each new trip.