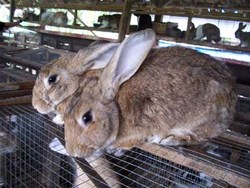 Welcome to Istana Kelinci (Bunny Palace), a kennel for rabbits in Bogor famous among pet lovers and research students. Located in a neighborhood on Jl. Perintis 1, Mekarjaya village in Ciomas district, the kennel keeps more than 200 rabbits of various breeds in four large cages. The 5,000-square meter area is also where people entrust their pet rabbits while they are away. The business started in 1996 when Sinto bought two female rabbits and three male rabbits and placed them in boxes. In no time, he said, the rabbits had multiplied to hundreds.

“Every year we receive students from the Bogor Institute of Agriculture and the Padjadjaran University in Bandung to conduct their research,” its owner Sinto Syam said.

“The rabbits roamed freely in the backyard. When one of them died, I fed it to stray cats and that was the beginning of disaster.

Learning from his mistakes, Sinto researched how to raise rabbits from books and other pet lovers.

In 2001, he made a comeback, and now has several rabbits, even endangered breeds from Papua and Kalimantan that he insists are not for sale according to Antara News.

Sinto said most of his customers at the Palace were fellow traders from Jakarta, Lampung, West Sumatra’s Bukit Tinggi and North Sumatra’s Medan. The traders usually ordered 200 bunnies at a time.

“We cannot meet the orders most of the time as we have limited area to breed that many rabbits,” he said.

The only downside to breeding rabbits in Bogor seems to be the ever-changing weather.

“We could have scorching heat, strong wind and then heavy rain in a day … Rabbits could easily become sick, so we feed them jamu (traditional herbal medicines) twice a week just like a human.”