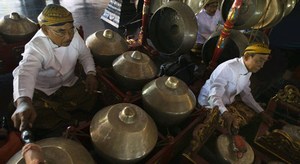 Gamelan are found in the islands of Java, Madura, Bali, and Lombok and other Sunda Islands and come in a wide variety of ensemble sizes and formations. The word “gamelan” comes from the Javanese word “gamel“. A gamelan is a kind of musical ensemble of Indonesia typically featuring a variety of instruments such as metallophones, xylophones, drums, and gongs; bamboo flutes, bowed and plucked strings, and vocalists may also be included. The term refers more to the set of instruments than the players of those instruments. Though gamelan music is still played throughout Indonesia – its collaborative rhythms can be heard at most traditional ceremonies and serenely wafting out of Bali’s meeting houses – its popularity is dwindling among the next generation of Indonesians, who are more easily lured by Western rock.