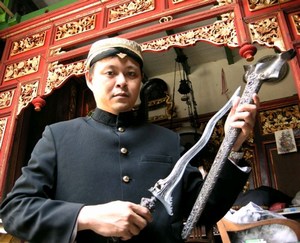 Tam Chen Siong, 36, an Indonesian of Chinese descent who is also known as Kanjeng Raden Tumenggung Hartonodiningrat, has enjoyed success in his efforts to preserve one of the country’s most treasured forms of cultural art. Tam’s father, Tam Hwa Seng, a businessman from Surabaya, and mother Phun Djoei Hing, hoped their second child would carry on the family freight business. If that ambition could not be achieved, they hoped he would at least follow in the footsteps of his grandfather; an architect who was involved in a number of projects in Surabaya. Tam, who earned a technical engineering degree from Petra Christian University in Surabaya in 1992, however, chose to become a master craftsman of kris (a wavy-bladed Javanese dagger).

“In the beginning, my family was very concerned about my choice of profession because they believed the job wouldn’t provide enough money. They always said my future would be gloomy,” he said.

Tam has long been known for his skills in making kris. From the age of 10, Tam, who grew up in Surabaya, was clever enough to make steel knives using workshop equipment that was used to repair and service vehicles belonging to his father’s freight business according to Indra Harsaputra.

Tam learned how to make kris from an older master craftsman from Surabaya, Kanjeng Raden Haryo Tumenggung Sukoyo Hadinagoro, who he met through one of his father’s colleagues.

However, he wasn’t immediately accepted as a student by Sukoyo, who believed the job of a master craftsman was difficult and should be more of a calling, like becoming a priest in the Catholic Church or a Buddhist monk.

“On my way home from university, I would stop by Sukoyo’s house to learn how to make kris. I was never absent when Sukoyo was hammering the metal to make a kris,” he said.

Noting his enthusiasm to learn about the kris, Sukoyo finally accepted Tam as his student. Tam not only studied the method of making a kris, but also learned the rituals observed by a master craftsman.

Tam had to overcome many obstacles to become a master craftsman; he had to learn to be patient while hammering a kris to ensure it had particular artistic value. Many times he failed to make a kris the way his teacher had taught him.

Other obstacles he had to overcome included fasting and undertaking special tests to become a master craftsman.

“At that time, I almost gave up. I wasn’t strong enough to go through all that, but finally with a strong push from Sukoyo I successfully overcame the obstacles,” he said.

“Many people are wrong in their ideas about kris, but for me the kris is a unique weapon. It wasn’t designed to kill people, but it can kill,” he said.

In 1998, Tam deepened his knowledge of kris when he studied alongside senior master craftsmen in Solo, such as master craftsmen Subandi, Daliman, Suyanto and Pausan. He also met the late Sinuhun Paku Buono XII.

Three years later, Tam was appointed as a high-ranking court servant in the Solo Palace with the title of Raden Tumenggung.

His appointment aroused some controversy in the Solo Palace, because at that time he hadn’t reached the age of 40.

“I was one of the youngest master craftsmen in Indonesia from the Solo Palace. I was respectful towards Sinuhun because he warmly accepted a person of ethnic Chinese descent,” he said.

This, he added, proved that the kris was not exclusive to Javanese society, but could also be studied and belong to anyone, including those who are not from the native Javanese bloodline.

“Before he passed away, Sinuhun raised my title to Kanjeng Raden Tumenggung. At that time, I promised in my heart that I would preserve the kris as a cultural object of the Indonesian nation,” he said.

Tam joined other Indonesian master craftsmen in the so-called “kris war” of 2006 — a dispute with craftsmen from Malaysia and Singapore over the two countries’ claims the kris was their own heritage item.

“I knew their intentions were not good … they wanted to steal information to strengthen their claims that the kris did not originate from Indonesia, but came from their countries,” he said.

Tam and other Indonesian craftsmen were outraged over the way in which the neighboring states attempted to “steal” Indonesian culture. Together with other kris artists, Tam approached government officials and urged them to defend the nation’s culture and art.

“Fortunately, UNESCO finally decided that the kris belonged to Indonesia. In March 2007, together with other artists, we formed the Indonesian Kris National Secretariat as the coordinating institution for all master craftsmen to fight for the preservation of the Indonesian kris,” he said.

Tam’s struggle to defend the kris as an Indonesian heritage item made his parents proud of his achievements and career choice.

“That gave me the opportunity to reassure my family that taking on the job of a master craftsman wasn’t in vain,” he said.

“For me this job is unique. I’m proud that I’ve been able to learn many aspects of traditional Indonesian culture that have almost become extinct … while learning about Javanese spirituality, which is so interesting and full of philosophy.

“Here I have found happiness, peace and an adequate income.”

A kris made by Tam sells from between Rp 2.5 million (US$270) to hundreds of millions of rupiah.

Some government officials and leaders in Indonesia, such as former vice president Hamzah Haz and former Bali Regional Police head I Made Mangku Pastika, have purchased kris made by Tam.