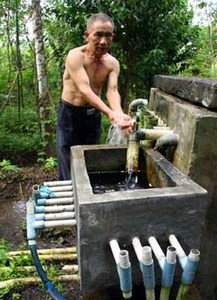 In the early 1980s, when the environment was rarely an issue, a man in Nganggring village, on the southern slopes of Mount Merapi in Yogyakarta, began taking steps to protect the land where he lived. Sambyah, now a 61-year-old community leader in the village in Girikerto district, Sleman regency, was not alone in his work. Some 30 years ago, he and other residents in the remote village worked hard to turn their parched home into productive land. At the time, the village’s land was dry and sandy, making it hard for trees to grow and causing water shortages during droughts. Sambyah says it was the extreme poverty he saw in the village that made him determined to effect change.

“At that time, road access was really poor and there was no electricity or clean water. Almost all the houses were made from bamboo and had dirt floors,” recalled the junior high school graduate according to Tarko Sudiarno.

His dream was to turn the parched area into productive land, to help his fellow villagers live in prosperity.
Luck was on his side.

Around the same time, the Bantul regency administration launched a program under which it gave 14 goats to the village. Within two years, those 14 goats had grown into 175.

The villagers’ success in caring for and breeding the goats was the key to making Sambyah’s dream come true.

He began making fertilizer from the goats’ manure and their leftover food. The fertilizer was then spread on the villagers’ fields.

With time and continuous effort, the land slowly became fertile, and there is now a community forest covering some 75 hectares. The forest is planted with various hardwood and fruit trees, as well as plants to feed the goats.

The villagers’ standard of living began to improve as they began selling goats and harvesting fruit.

In 1997, with Rp 33 million in hand, the villagers took another step forward. Together, they set up a clean water distribution point, with the water coming from the Krasak River.

The money was used to buy pipes and other equipment to set up the water pipeline, while the villagers worked together to realize the plan.

Now a five-kilometer pipeline connects the river to the village, with the water used by the villagers to meet their household needs as well as to water their farms and their goats, which they keep in a vast enclosure nicknamed perkampungan kambing, or the goat village.

The villagers set up the enclosure on three hectares of land belonging to the village for health reasons, figuring it was more sanitary to have the goats kept together than wandering around the village.

There are also more visitors to the village these days, with people coming to soak in the environment or to study the success story that Nganggring has become.

After regreening their land and improving their living standards, villagers then spent Rp 29 million to bring electricity to the village, Rp 200 million paving the roads and Rp 25 million for a mosque.

It is evident from the number of people in the village who now own motorized vehicles that living standards have improved dramatically since this project began.

Sambyah recalled that the work to regreen the area was not as smooth as it might sound. Along the way, he constantly faced challenges from illegal sand miners and even from some residents.
But patience helped him realize his dream.

The village — a role model for regreening efforts on the slopes of Mount Merapi and a support water source for Yogyakarta city — is now a green oasis with a bright future ahead.