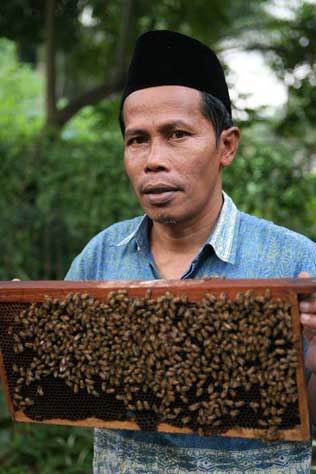 Visitors are warmly greeted at the clinic in the Scout Apiary Center in Cibubur, East Jakarta, where Muntowib, 45, offers bee-sting therapy, also known as cultivar api-puncture.

Before treating patients, Muntowib asks details of their complaints and diseases, if any, they have suffered. He then promptly picks up a cultivated bee with a pair of tweezers and makes it sting nerve points on the body of his patients.

“Bees are harmless until we disturb them,” Muntowib said while treating patients, who come from all over the country.

“Most of them have given up on medical treatments and are tired of taking drugs without any recovery prospect,” said Muntowib, who dropped out of Sunan Ampel Islamic Institute in Kediri, East Java.

Yongki, a stroke patient with a paralyzed arm and leg, has enjoyed improved muscle movement after regular bee stings at the Cibubur apiary. Previously he dragged his foot when walking. Now he can walk normally and move his hand.

Cultivar api-puncture, a healing method dating back to ancient civilizations, is one of the many alternative treatments mushrooming in the country. And therapists like Muntowib believe that disease caused by nervous disorders or blood vessel clogging can be cured with bee venom, called apitoxin, which stimulates the heart and produces a “warmth” through the cardiovascular system.

While the healing power of apitoxin is yet to be proven scientifically, response to the bee-sting clinic in Cibubur has been overwhelming and the apiary center appointed Wardoyo as Muntowib’s assistant in 2004.

“Pak Muntowib is working very fast and can divert his patients’ attention. He will tell stories while putting bees on his patients’ body. Within seconds, he will be smiling and joking to see them grimacing with pain as the bees sting,” said Wardoyo.

“Some people come here to look around because they are scared of being stung by bees or aren’t quite sure if bee stings can serve as a cheap and effective remedy,” added Wardoyo.

Muntowib is a third generation api-puncture therapist at the Cibubur apiary center, which was set up in 1973. He started out in 1992 as a staff member at the center’s honey packing division. In 1998, he was assigned as an assistant at the api-puncture clinic. With his fast command of the therapy, the center named him chief therapist in 1999.

The third of eight brothers and sisters, Muntowib was born in Kelutan Ngeronggot, Nganjuk regency in East Java, before being sent to Jakarta in 1987 by Darul Ulum University in Jombang, East Java, to work for then House of Representatives speaker Amir Mahmud, who was a patron of the university. Muntowib later asked to be moved to Amir Mahmud’s seven-hectare plantation in Pondok Ranggon, East Jakarta.

“After working for some time in Pondok Ranggon, I formed a close association with Hadi Martono, who took care of the Wiladatika Flower Park in Cibubur. Hadi, whom I consider my foster father, asked me to join the Scout Apiary Center,” said Muntowib, a father of two.

“I was glad to get the offer because I had once been a scout myself, though the center has to do with bees and honey,” added the therapist, who likes cracking jokes while treating patients.

With his permanent employment at the center, Muntowib went back to his home village in 1993 to marry a neighbor, Siti Ulfah, who was 10 years his junior.

“I wouldn’t have gotten married had my older brother not sent me a letter asking me to come home,” recalled Muntowib, whose marriage had in fact been arranged by his family.

“Although we were neighbors, I didn’t know Muntowib much as he was away in Jakarta. I was completely speechless when his parents made a marriage proposal for him while he wasn’t with them. So I couldn’t believe it. It was just like a dream,” Siti Ulfah, 35, recounts with a laugh.

“The day after the wedding, when we left Nganjuk for Jakarta by train, I just began to know how it felt to have a date, while we were already married,” she added.

Api-puncture, according to Muntowib, was already widespread in China 2,000 years ago. “It applies the methods of acupuncture. But while metal needles are used in acupuncture, bee stings replace needles in api-puncture.”

The points of the bee stings on the body are the same as in acupuncture, where illnesses can be healed. In api-puncture, ailments of the nerves and blood vessels are treated with the venom of worker bees, which in the Cibubur apiary belong to the honeybee colony of Apis Mellifera, a species from Australia.

“Three species are raised here in Cibubur, which are Apis Mellifera, Apis Screna and Apis Dorsata. In the scout apiary center, the bees are raised for api-puncture as well as for their honey.”

To broaden his knowledge about bee therapy, Muntowib reads books on honeybees. The center also provides the latest information on bee culture developments in the world, obtained annually from national and international congresses. He, for example, learned how honeybees demonstrate amazing social behavior, in which the law of the jungle does not apply. This, he said, should inspire men in their relations with fellow humans.

“Honey bees are loyal to their queen bees. They don’t want to trouble fellow workers and fly away from their hives when their death nears,” said Muntowib, adding that bees live for just five to six weeks.