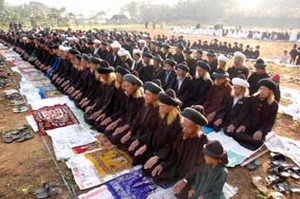 Islam is an easy target for misrepresentation. It has been misunderstood and misused for centuries by its ignorant followers as well as its “enemies”. It is no surprise then that questions about the nature of the religion have been reiterated over the past three decades. Does the faith recognize human rights? Is it compatible with democracy? Does it respect women? Is it tolerant? Can it cope with modernity and adopt its modern institutions? A bulk of scientific, philosophical articles have been written to answer these indicting questions, but the prejudices against the faith persist.

It is in such a frustrating situation that Muslim author Habiburrahman El Shirazy writes his novels and now plans to translate his most popular piece, Ayat-Ayat Cinta (Verses of Love), into English according to Ary Hermawan.

The movie based on the novel, which bears the same title, has proved to be wildly popular — making schoolgirls and even the President shed tears.

“I just want to show the beauty of Islam that I feel and comprehend. Islam encourages its adherents to do good unto others and orders them to develop and respect the truth,” the 32-year-old said in a email interview.

Graduating from Cairo’s Al-Azhar University, the oldest and the most prestigious university in the Islamic world, Habiburrahman is among the few Indonesian Muslim writers who is well-versed in traditional Islamic studies such as the hadith, fiqh (Islamic jurisprudence) and Koranic exegesis. He was also brought up in a pesantren (Islamic boarding school) culture in Demak, Central Java.

His past distinguishes him from other Muslim writers, especially those from local state universities — like the University of Indonesia, Gadjah Mada University, Padjajaran University and the Bandung Technology Institute — who were mostly brought up in secular schools and who learned about Islam from translated books and by participating in the tarbiyah movement, the genesis of the Justice Prosperous Party (PKS).

Kang Abik, as his friends call him, said his novels do have a purpose — the propagation of Islam.

To some readers, his works might sound irritatingly preachy as they were written with the conviction that “one of the ways to serve God is to use art as a medium to promote virtue”.

“Art in Islam is considered to be in accordance with human nature, or fitrah. Islam recognizes that human beings need beauty, or arts. As serving God is the ultimate purpose of human life, everything (including making art) is a form of ibadah (worship) if it is aimed to serve God,” he said.

But is not art identical with the freedom of expression?

“Every human being has desire. There is always this desire that tells a person to do evil. This desire has often turned art into a medium of gratification and freedom of expression is often used as an excuse. It contradicts the true nature of art, which is the beauty that enlightens people,” he said.

Art and religion have long been part of Abik’s life.

“It all started when I participated in a poetry reading competition
in elementary school and won it. I read a poem by Chairil Anwar entitled ‘Pangeran Diponegoro‘ (Prince Diponegoro). I was so happy because they gave me books as the prize. Since then, I have continued to enjoy literature. It all started with that poem,” he said.

He said he started reading novels when he was in elementary school.

“There were several novels about the national struggle for independence in the school’s library. There was a movie titled Serangan Fajar. I think that’s the reason why I loved reading novels with a national theme,” he said.

Before leaving for Egypt to study at Al-Azhar, he had won many art competitions. He had also written and directed a theatrical poem entitled Dzikir Dajjal (The Remembrance of the Anti-Christ) during high school.

In Ayat-Ayat Cinta, which is based on his contemplations of one the verses in the Koran, Kang Abik tries to present the “correct” Islam. One of the things that he tries to highlight is the relationship between Muslims and non-Muslims, especially the ahlul kitab, or “people of the Book”.

“The most important thing in becoming a Muslim is contemplating the Koran consistently and responsibly. I believe if people understand the Koran correctly, they can be as mature as Fachri (the protagonist in the novel) when he interacts with Maria, who is a Coptic Christian,” he said.

His novel goes further than telling Muslims to respect their Christian neighbors and guests. There are two sensitive issues, he said, that mainstream Muslims in Indonesia have missed or intentionally overlooked in the novel and the movie.

Kang Abik believes that interfaith marriage — as conducted by Fachri and Maria — is allowed in Islam, though with “several important conditions”.

“The ground is clear as stated by sura Al-Maidah verse 5,” adding that he was “following the opinion of the majority of the ulema“.

The other issue concerns the controversy of polygamy. While a number of Muslim preachers promote polygamy, Kang Abik believes that “Islam demands justice, including in marriage”.

“I believe that monogamy is more just than polygamy.”

The character Fachri is loved by four women and marries two of them, but the novel highlights Fachri’s natural inclination to be monogamous and — as clearly shown in the movie — depicts the psychological effects of a polygamous marriage.

“Polygamy is commanded by God as a solution, not a purpose. In the words of the majority of the ulema, polygamy is arukhsah (relief or dispensation), which should be carried out in a condition of emergency. We have to see this matter correctly. Sharia never intended to abuse people,” he said.

Amid his activities as a lecturer and manager of his pesantren, Basmala Indonesia, and traveling from one city to another to talk about Islam, Kang Abik still proves himself to be a prolific writer.

He reiterated that he writes his novels to promote kindness, not to counter other novels, including the famous work by Salman Rushdie, The Satanic Verses, which is considered blasphemous by the majority of Muslims.

“Ayat-Ayat Cinta will be translated into English, it is not aimed at countering any novel.”