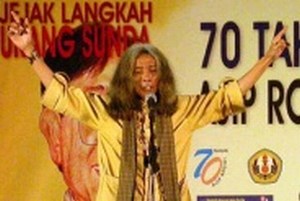 From the long white hair to the sarong-style trousers and leather sandals from the West Java town of Garut, everything about Godi Suwarma says “artist”. But the Sundanese writer does not care what people think. He believes in his choice to become an artist, a decision many people find hard to accept. In a writing career spanning more than three decades, perhaps Godi’s greatest achievement has been winning the Rancage Literary Award three times.

He received the prize most recently earlier this year for his novel Sandekala, which deals with the reform movement.

To launch his social criticism of the reform movement in his village, he drew a lot of inspiration from the Pandawa characters in the epic Mahabharata according to Yuli Tri Suwarni.

His other winning works were an anthology of poems, Blues Kere Lauk, in 1993 and a collection of short stories, Serat Serasatwa, in 1996.

Most of Godi’s work is written in Sundanese, although as a student he often wrote in Indonesian, including some stories published in the Sunday edition of Kompas.

“Writing in Sundanese is really satisfying for me,” he says. “It has a much richer vocabulary for feelings than Indonesian does. For a writer, the vocabulary is like your ammunition store.”

But then, traditional Sundanese art and culture are in his blood. Born on May 23, 1956, Godi spent his childhood in the hamlet of Cirikip, in Panawangan, Ciamis, more than 150 kilometers east of Bandung.

His parents were both junior high school teachers, his father of drawing and his mother vocational skills.

His mother is also a singer of traditional songs from Cianjur, while his father plays kecapi, a traditional Sundanese string instrument. Growing up on a diet of Sundanese songs, Godi liked reading Sundanese stories and literature. His parents, who subscribed to the Sundanese weekly Mangle, also read him bedtime stories as a boy.

His love for Sundanese culture grew stronger when, after 1965, he began listening to poetry set to music on the family’s old radio.
He remembers listening to Mang Koko, who played kecapi and read poems written by Wahyu Wibisana and Dedi Indragiri. The program, broadcast by RRI state radio every Friday evening, appealed to many other local people also.

“It made a big impression on me because the poetry reading was accompanied by the kecapi in a way that deeply touched the soul,” Godi says.

Not a single day during his childhood passed without him experiencing some form of Sundanese arts and culture.

When Godi was in junior high school, his uncle, Mang Dedi, sent him to Kondang Kampong Children community classes in Cinyasag, Ciamis, to hone his acting skills.

He continued his studies at Pasundan high school in Tasikmalaya, a larger town where he could express his youthful artistic feelings by singing rock songs.

“We spent the night singing very loudly at crossroads. But then I began to write poems when I got home,” Godi says.

He wrote dozens of poems in longhand — he still feels “stupid” when it comes to computers — which he has never published.

He later studied Indonesian literature at the Indonesian University of Education in Bandung. There he found a strong literary community that encouraged him to explore his creativity. He performed plays and wrote a lot.

“I sent ‘Surat keur Susi‘ (A Letter for Susi) to Mangle and it was published. After that, many Sundanese literary men began to appreciate my work,” Godi says.

The appreciation moved Godi to identify himself as a writer. He published his first anthology of Sundanese poems, Jagat Alit (Small World), in 1978. Godi says he wrote the work after meeting his uncle, who died young, in a dream. His other anthologies of poems are Jaka Tarib (1978) and Surat-surat Kaliwat (1982).

Godi later turned his hand to short stories and published his first collection, Murang Maring, in 1985.

After graduating from university in 1983, he tried teaching, but it clashed with his free soul. He lasted three months as a teacher at a junior high school in Bandung.

“I could not stand the routine in facing the students,” he says. “Fortunately, I was transferred to the art department in the Education Agency.”

Not long afterward, Godi took a break from writing when he became involved in the theater after director Wawan S Husin asked him to join Bandung Theater Study Club.

Finally he decided to return to the literary world and moved to his parents’ house in Panawangan, Ciamis, in 1990.

In his hometown he started to write again and developed Sundanese theater there, especially after he married a dancer in 1991. He has four children, Denisa, 28, Rengganis, 24, Galia, 15, and Welas, 5.

“I feel I became more productive after moving to Ciamis,” he says.
For Godi, money is not important.

“As Acep Zamzam Noor (a young Sundanese artist) puts it, it is not the Sundanese literature that feeds me, but me who feeds the literature. I am a civil servant, so I can survive if I lead a modest lifestyle,” he says, laughing.

He donates the fees he received from publishing his works — he says he receives Rp 50,000 for poems and Rp 100,000 for short stories — to Sundanese publications, Mangle, Cupumanik and Galura.

“If you publish a book, you can cover the production costs, but it’s hard to get rich,” he says.

In Ciamis he has advanced many ideas for preserving Sundanese arts and culture. Every year since 1998, he has organized Nyiar Lumar, a night-long talent show. The shows are held in Astana Gede Kawali, Ciamis, the jungle that was once the site of the Galuh Kingdom, and features Sundanese dances, poems and plays.
Unfortunately, the local youth do not seem to share his love of traditional arts and culture.

Most of them, he says, forget about Sundanese arts and culture when they move to a big city to study.

“After studying in the city, they don’t explore their talent because the situation is different. They have so many choices. Some may continue to pursue it, but only very few,” he says.

This does not deter Godi from his passion for preserving Sundanese art. Instead, he feels challenged to guard his traditional heritage and is determined to work even harder to encourage young people to be proud of their Sundanese traditions.